Saturday, October 8
You are at:Home»News»Sarawak»Kanang remembered in movie named after him 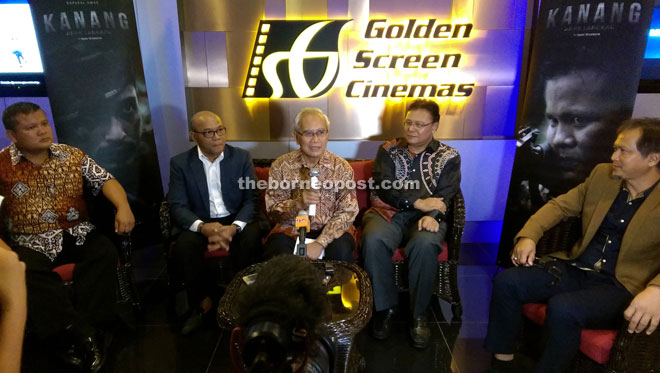 (From left) Langgi, Khusairi, Jabu, Kamil and Zainal at the press conference held before the screening of ‘Kanang Anak Langkau: The Iban Warrior’ at GSC Cityone Megamall. 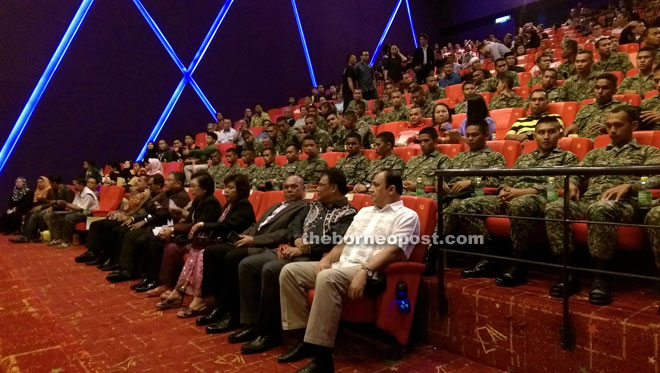 Starring as Kanang is his own son Cpl Langgi Kanang. The patriotic movie will be aired in cinemas in August and at Dataran Merdeka this Aug 31.

The film, produced by Tangan Seni and funded by the National Film Development Corporation Malaysia (Finas), is in line with the country’s film policy of producing quality films capable of penetrating both the local and international market.

According to Finas chairman Dato Mohd Khusairi Abdul Taib, the film is also a good way to promote and remember historical figures and their contributions to the country.

“We hope that through this, the citizens of Malaysia could learn and appreciate the country’s history and take life lessons and positive values from it,” Khusairi said during the gala premiere of the movie at Golden Screen Cinemas (GSC) in Cityone Megamall here on Sunday night.

Khusairi added that patriotic films such as this should not only be played during National Day but be a learning component in educational institutions.

“Therefore, we are in discussion with the Information Department and Jasa to have the story of Kanang shown in rural areas so they will be able to learn about a national hero,” he said.

Meanwhile, Jabu said the people of Sarawak would definitely be proud of the film that showcases a warrior from the ‘Land of the Hornbills’ who was willing to sacrifice his life for his beloved homeland.

“The younger generation should learn from history on how hard it was to create development without sacrifice against colonists and external threats,” Jabu said in his speech, adding that Kanang’s next-of-kin were sure to be proud to have such a notable warrior in their family history.

Kanang was conferred the prestigious Panglima Gemilang Bintang Kenyalang (PGBK) award in 2011 and was among the few to receive the Sri Pahlawan Gagah Perkasa (SP) and Pingat Gagah Berani (PGB) gallantry awards.