Sunday, May 22
You are at:Home»Features»Old-timer turns retirement gift into erhu passion 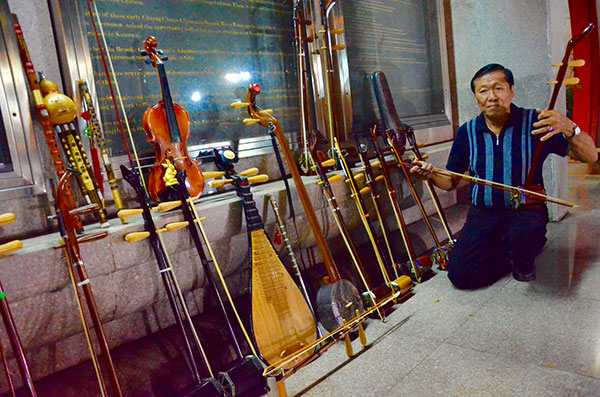 Wong tries out an erhu he made with belian wood. — Photos by Othman Ishak

THE erhu has changed the life of retiree Wong Leh King who was given the musical string instrument as a gift in 2007.

Wong, 76, had been toiling all his life in the stainless steel business to raise his children. When the family insisted he call it a day in 2007, his daughter gave him an erhu, hoping it would keep him from getting bored in his golden years.

For a while, the septuagenarian pondered over what he would do with the two-string Chinese classical music instrument that evolved from a Mongolian fiddle, dating back 1,000 years. He neither had the musical background nor the skills to play any musical instrument, let alone one like the erhu.

“It’s no child’s play making music with a musical instrument that has only two strings,” he said.

However, once he started learning to play the instrument, he quickly fell in love with it. And with practice, he mastered the basics and got better and better.

Now, the old timer gathers his little orchestra of traditional Chinese musicians every night at the garden of the Tua Pek Kong Temple by the river, to play soothing melodies amidst the cool evening breeze.

Wong said: “I’ve found the second phase of my life. I now not only play the erhu, I make my own erhu too. And I want to share this music experience and pass it on. I’m willing to teach youngsters who are interested to learn.”

This is the lighter side of a story that portrays the many faces of Sibu where family bonds and warm friendships take centre stage. Indeed, the cultural ambiance is rich.

Four decades ago, there was another group playing Chinese classical music nightly at the Moi Soung coffeeshop, a stone’s throw from where Wong’s band is now playing. The group of five to six men played at the coffeeshop for more than 10 years.

And for the townsfolk, vivid memories of the group’s gigs in the 70’s come flooding back whenever they pass by Channel Road.

Some of the musicians in the Moi Suong group have passed on while the surviving members have also stopped playing at the coffeehouse. 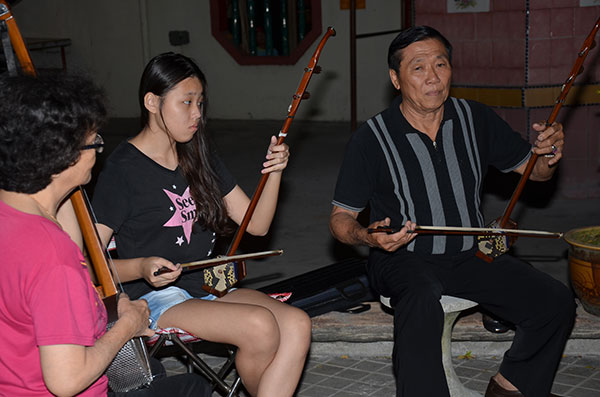 (From left) Wong with Audrey and his wife.

Wong’s group has revived the nightly sound of Chinese classical music in Sibu, playing folk and pop songs of yesteryear such as ‘Fragrant Flowers on Full Moon Night’, ‘Night of the Green Island Serenade’, ‘The Wondering Songstress’, ‘Under the Banyan Tree’ and more.

He recalled not knowing what to do with the erhu when he received it as a gift from his daughter.

“Being a two-string instrument, the sound is awful to a beginner. It’s like a cock crowing. I felt embarrassed and learned to play only at secluded spots.”

Wong remembers grabbing the chance to practise whenever he picked up his grandchildren from school.

“I would park my car away from the crowd, wind up the windows and start playing. It might be hot under the afternoon sun but it was okay and eventually, I mastered it.”

He not only plays the erhu well today but even talks at length in interviews about the keys and technicalities of music — like an old pro.

“Erhu is one of the hardest instruments to master. For me, it all boils down to determination. The skills, as I have discovered, lie in handling the bow to produce a fine sound. And if others can, I can too.”

Wong said he started practising with simple tunes, and once he had captured the melody, it opened him to the world of music.

He and his group play at a quiet spot behind the temple. The iconic pagoda towers majestically on one side while a stone-carved dragon-turtle stands at the side gate of Chian Chuan Garden. The scene is akin to the romance of the Chinese classical beauty.

Wong is soft-spoken. Whenever the group plays, he will lead. Accompanying him are three other Chinese musical instrumentalists — Wong Nip Sing, 82, Wong Chew Chuong, 78, and his teenage granddaughter Audrey.

Wong’s wife used to sit beside him, listening. His other grandchildren occasionally keep him company.

He takes great pride in 17-year-old Audrey, a secondary school student who has inherited his musical talent.

“My granddaughter learns fast. She picked up erhu two years ago and is now playing well,” he said. 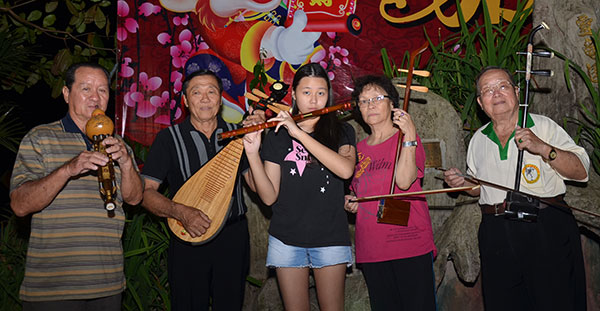 Over a two-hour nightly session, the group play and chat. They look forward to meeting again the following night.

On the night of the interview, it started to drizzle and Wong’s group quickly packed and left. The interview (and photos) resumed on another night

According to Wong, the group played at a senior citizens club before deciding to move to Chian Chuan Garden for convenience. At first, they dared not get into the temple garden.

“We gathered under the century-old raintree beside the temple and there were lots of mosquitoes. A temple worker saw us and invited us in. We have been playing here for a year now.”

Wong welcomes potential erhu learners to join them, saying: “For those who wish to sing, we can also have a singing session. We can perform live music for them.”

Eager to teach youths, he said: “Chinese classical music must not fade away for our future generations. If youths want to learn, I will teach them and give them an erhu each — like how I got the gift from my daughter. It changed my life.”

Another challenge for Wong is making his own erhu. He has visited shops selling Chinese classical music instruments in Beijing and Shanghai.

The erhu is made of ebony or sandalwood. Wong makes his with tropical hardwood or belian.

He buys some of the materials and the finished product takes the shape of a horsehair bow.

“I have made more than 30 erhu. I am happy with the last one I made. So I have stopped making.”

Wong has donated some of his erhu to the Methodist Children’s Home, hoping the youngsters will take an interest in Chinese classical music.

He challenges himself further by making a few other string instruments, including one larger than the erhu which produces a low sound similar to an original Mongolian fiddle called ‘horse-head fiddle’. Although he has also made a stainless steel flute, he admits no flutes made of other materials can beat a traditional bamboo flute.

Wong has learnt to play another Chinese musical instrument — hulusi or cucurbit flute from Yunan.

Again, he is self-taught.

He is now learning a classical piece of the 50’s, composed by blind street musician Ah Bing. It’s titled ‘The Moon Reflecting on Two Streams’.

“I have obtained the music score. It’s challenging because to play it well, one must capture the emotions of Ah Bing’s bitter life which was ravaged by wars and miseries during the fall of Qing Dynasty in an era of warlord conflicts, followed by the invasion of the Japanese and the rise of the People’s Republic of China,” he said.

Meanwhile, the ebb and flow of erhu music continues to mesmerise nightly at Chian Chuan Garden as Wong gathers his musicians at the temple to carry on the legacy of the Moi Suong CoffeeShop group of the 70’s.

The show goes on.