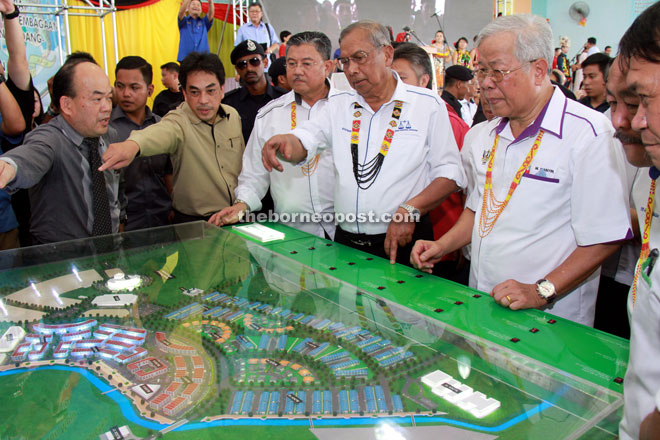 Adenan (centre) discusses the project with Morshidi (on his right) and Manyin (on his left) as they look at the development model. — Photo by Chimon Upon

SERIAN: The building of a new township, state government complex and a conference centre here will help to support economic and social growth of Serian Division as it continues to expand.

Saying this when launching the project at SJK Chung Hua Serian here yesterday, Chief Minister Datuk Patinggi Tan Sri Adenan Satem pointed out it was high time Serian had a proper government office complex considering that it had been elevated into a division.

The complex, together with the conference centre, will cost around RM200 million.

as 240 shops and commercial units. On a whole, Adenan envisioned the project as a game changer in Serian’s economic landscape.

“The elevating of Serian into a new division will see an increase in administrative and development fund. Now that Serian is a division, it deserves to have its own government office complex. As for the new township, it will certainly cater for the expansion of Serian,” he said when addressing the hundreds of people attending the project launch. 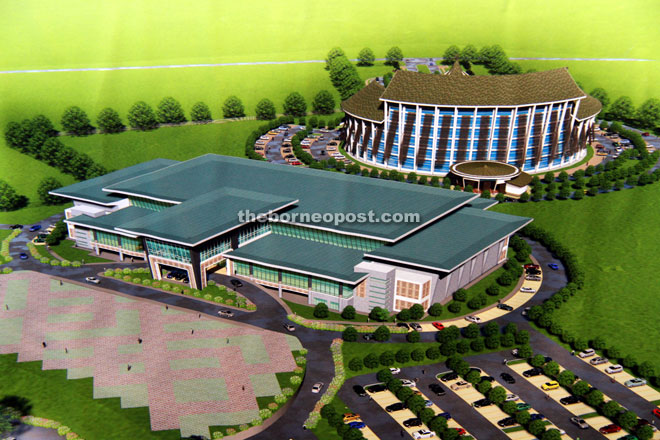 An artist’s impression of the convention centre and government complex (background). 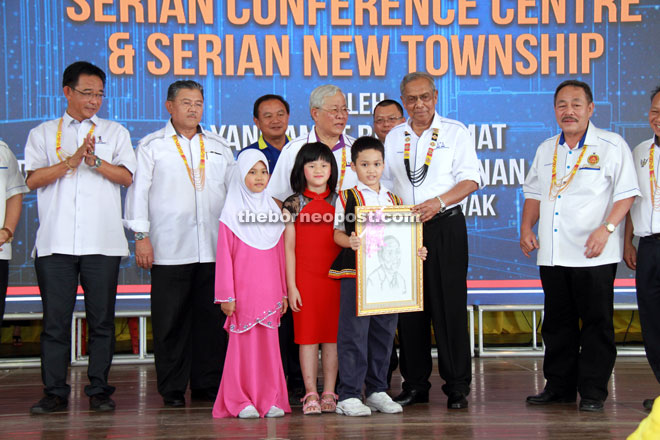 Adenan receives a portrait of himself drawn by pupils of SJK Chung Hua.

During a press conference after the event, Adenan said he anticipated the whole development would take about seven years to complete and the whole project would be built in stages.

The new township extension sits on a 168-acre land adjacent to the Serian town.

At the event, Adenan announced a grant of RM100,000 to SJK Chung Hua Serian. He also presented appointment letters to community leaders and village heads as well as land title for the new site of 35th Mile SJK Chung Hua along Jalan Kuching-Serian.

Manyin, in his speech earlier, said the project would expedite the development of Serian. With the Pan Borneo Highway passing through Serian District, he believed the town will become a ‘must-stop’ centre for travellers.

He targeted the complex and conference centre to be completed within two years.