Sunday, May 22
You are at:Home»Columns»Perspective»Misstep, miscommunication and misunderstanding 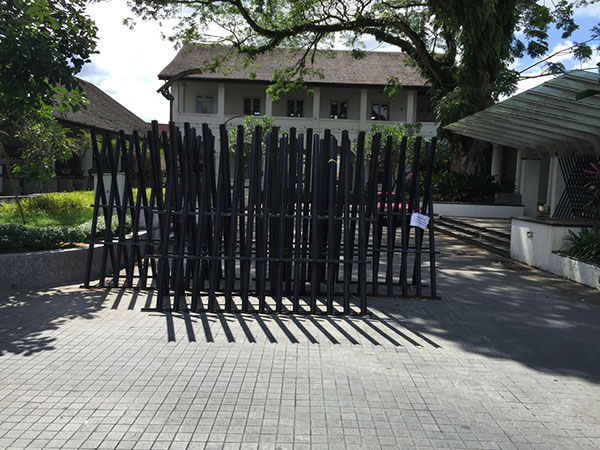 ‘PIXMAN outraged by RM250 charge for photo-shoot at Old Court House’, screamed the headline. It was accompanied by a few photos, one of which showed a row of intimidating-looking black iron barricades partially blocking a footpath. In some journalistic circles they use a term called ‘kicker’. This presumably refers to words or sentences that would kick the readers out of their stupor to read what is written. Well, the sight of the black barricade really kicked me in the region that made my eyes watered.

I have a reason. I like to walk around town for my daily exercise. My favourite route is along the Kuching Waterfront then through the Old Court House and up Rock Road. Sometime ago I found my intended route blocked by that monstrosity. Grrrr. When someone posted that news report on Facebook, I found that I was not the only one who got his hackles up.

Here are a couple of samples for starters.

“In some places such barricades are used to protect VVIPs like presidents or similar people like heads of state from mobs or rebels. The only absence is the security forces, guns and armour.  Looks so ugly from this view. Unfriendly and giving an impression that there is a state of fear in this peaceful city.”

“What the hell is this government doing by allowing this to a heritage site?” shouted another.

The attempt to charge the photographer also raised the ire of many. Many sniping remarks were posted directed at ChinaHouse, the establishment managing the Old Court House premises. Unfortunately the justification given by one of the managers that “the charge was not for profit, as all proceeds would go to charity – specifically to Sarawak Society for the Prevention of Cruelty to Animals (SSPCA)” only added fuel to  the fire when some key members of SSPCA said they were unaware of any such donation arrangement. The more sceptical among us immediately assumed that the operator was trying to use the name of charity to make money.

It is no understatement to say that many Kuching folk were outraged by this affair, and why not? Especially when they read the rather emotive first paragraph of the news report: “A wedding photographer, a just-married couple and their entourage were shocked beyond belief upon learning that they had to fork out RM250 for a shooting session at the Old Court House on Sunday.”

So I decided to do some research. I realised that it was a case of misstep, miscommunication and misunderstanding. It reminds me of ‘The blind men and the elephant’. It was written by John Godfrey Saxe I (1816 –1887), the American poet known for his re-telling of Indian parables.

“It was six men of Indostan

“To learning much inclined, “Who went to see the Elephant? “(Though all of them were blind), “That each by observation

He went on to say that each one of the blind men touched a different part of the beast’s anatomy and by each own subjective perception concluded that an elephant is a wall, a spear, a snake, a tree, a fan or a rope. He concluded thus:

“And so these men of Indostan

“Each in his own opinion

“Though each was partly in the right,

“And all were in the wrong!”

I managed to collar one of the managers and questioned him rather aggressively.

“What’s this thing about charging RM250 to people who want to take photographs here? And how about the forbidding looking black iron barricade, are you trying to deny our access? Don’t you know that this is a historical site, one of our heritage buildings and we should be entitled to use it?”

“No, no, it is a total misunderstanding. We know that this is a people’s place and they can visit and have their pictures taken here. The RM250 levy is meant for professional photographers on commercial location shooting.”

He then gave me an outline of the terms for usage of the place.

They can use the space for up to two and half hours.

Allowed to use internal spaces in areas as per agreed according to allocated time.

Must pre book so that the best time allocated for mutual benefit to avoid clash with other ongoing events.

No photography next to guests.

Be mindful of not upsetting guests.

Air-conditioned room for costume change and make-up will be provided.

The establishment undertakes to contribute the money from the photo shoot to a chosen charity.

For good measure, he copied me the email exchange between a client and the outlet’s sister company in Penang.

“My fiance and I are big fans of China House. When it comes to anniversary, birthday, and special occasion celebrations, China House is always our first choice because the cakes and coffee are simply amazing! So this time around, we would like to shoot our pre-wedding photos at China House.

1. How much do you charge for a two-hour photo shoot?

2. What days in the week/month are okay for photo shooting?

3. Which areas in China House can we use for photo shooting?”

The following is China House Penang’s reply spelling out the arrangement.

“Thank you for choosing us, ChinaHouse, as your venue for your pre-wedding shoot. We will be glad to accommodate your request, as long as it does not interfere with our other guests that dine in ChinaHouse during your pre-wedding shoot. We propose doing the shoot during weekdays (Monday to Thursday), as it is our non-busy period with less crowd. The best time is between 3pm and 6pm after the lunch hour rush. “Our minimum charge for a photo shoot is RM250 for up to two hours and RM500 for up to four hours, which is in a form of a donation made to LASSie (Langkawi Animal Shelter & Sanctuary Foundation), an animal welfare charity that is based in Langkawi.

“Please do visit the website for more details of the good work that they do. http://www.langkawilassie.org.my. Below are the LASSie bank account details, you may pass the cheque/cash to us on the day of the photo shoot or proceed with your donation by bank transfer.”

I don’t know about you, but this sounds reasonable to me. However, I was in no mood to be so easily appeased. So, I asked, “What about those ugly black iron barricades?”

“Actually people can still have access but we do need to put up some sort of barriers.”

“Well, for safety reasons. We are still in the process of cleaning and restoring this place … come let me show you.”

He took me on a tour round the place. Indeed there are works going on and in one area I can see some carpentry equipment, including a bench circular saw. I can see his point about safety but now that they have started to have public events there and the cafe is fully operational I would have thought the barrier is superfluous.

I hope they will remove the unsightly thing soon but at least now I can see more clearly what this particular elephant looks like.