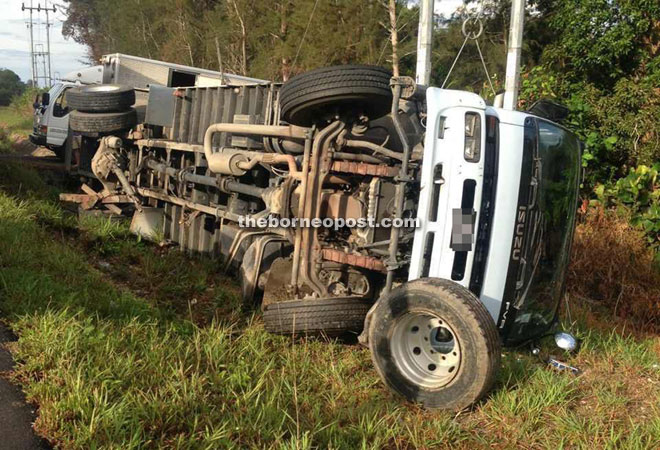 The lorry landed on its side after avoiding an oncoming car.

MIRI: A container lorry parked at a workshop in Senadin caught fire on Saturday evening, which resulted in several minor explosions.

Just as the lorry spewed flames around 5.45pm, passers-by alerted Fire and Rescue for assistance.

One engine from Lopeng Fire Station which was immediately mobilised to the scene had the fire under control a few minutes later while smoke could be seen billowing from 500m away.

It was learnt that the lorry was sent to the workshop for repairs. No injuries were reported in the incident.

An investigator from the Fire and Rescue Department has yet to determine the cause of the fire which burnt the lorry’s container.

In a separate incident in Bakam yesterday, a lorry heading towards Miri flipped over on its side when the driver avoided an accident.

The lorry crash-landed by the roadside, as the driver, and co-driver who were unharmed in the 6am incident, took evasive action with an oncoming car in its lane.

Police are still investigating the actual cause of the crash.