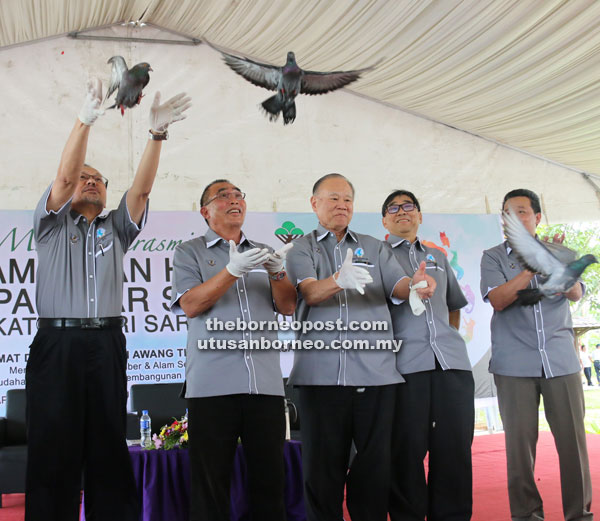 “I support such a proposal. That means the functions of these two departments (wildlife department and ForestDepartment) will become clearer and focused,” he added.

He said this would be in line with the government’s aim to ensure good management of the forests and wildlife.
BN candidate for Kuala Rajang Datu Len Talif Salleh read out his speech at the function.

Awang Tengah, who is BN candidate for Bukit Sari, pointed out that the exploitation of wildlife had a negative impact on the stability of the environment and social values of the local population.

“If nothing is being done, all wildlife will go extinct in the blink of an eye. “I hope this celebration would be the start for all of us to find ways and efforts towards a more sustainable and appropriate approach based on our capabilities and culture,” he said.

According to him, due to the conflict between crocodiles and human beings, the government through the state Forestry Department has initiated the Crocodile Free Zone.

“It is aimed at reducing the conflicts and making crocodiles a tourism product at designated areas. This in turn will boost the income of that area through crocodile-based eco-tourism programmes,” he said.

Awang Tengah also pointed out that the Sarawak Forestry Corporation (SFC) was making efforts to create awareness through its 3M buaya campaign – to know, understand and conserve crocodiles.

He said up to this month, seven cases of crocodile attacks had been reported this year – three deaths, three injured and one missing.

“Sustainable and effective management of wildlife and forest needs efforts from all parties,” he said, explaining why the government had appointed honorary wildlife rangers among community leaders and established the Forest Reserve Special Committee.

Calling on non-governmental organisations (NGOs) to help educate the society, he said: “NGOs that have the same principles and goals as the state government are encouraged to cooperate with the government agencies and the local people to strengthen this conservation effort.

“I hope that such cooperation can be continued, thus opening the door of awareness to new generations that wildlife is not a threat but a treasure that we should keep.”

He hoped the conservation of wildlife would become an important agenda in the development of the state.