Friday, August 12
You are at:Home»News»Sarawak»Penans want loggings in upper Baram to stop 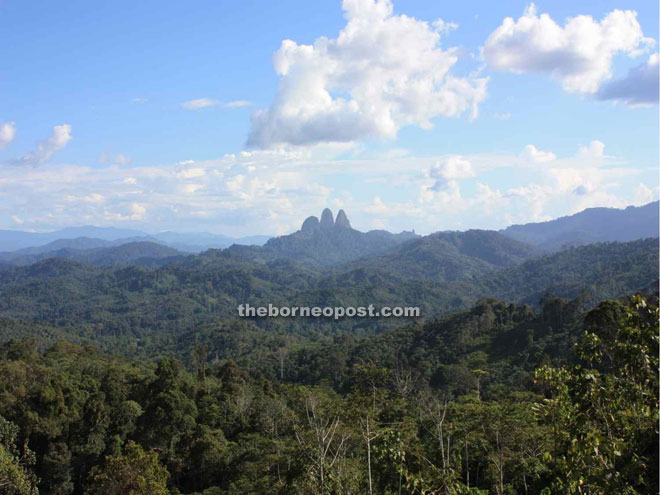 The Batu Siman, landmark in Upper Baram area that Penans seek from the state government to turn into a National Park to sustain their livelihood.

KUCHING: The Penan communities in upper Baram are requesting for a moratorium on the logging activities in their area and for the government to convert it into a National Park to sustain their livelihood.

According to a former Penan penghulu of Long Lamai James Lalo Keso, they were in fact pleased with the government’s interest in the realisation of a park in their area.

“Two weeks ago, we handed in a proposal for a ‘Community Managed Protected Area in the Upper Baram’.

“The last intact forest areas are important assets of the proposed park and we are presently watching how they are being destroyed. There is no time for hesitation; they need to be protected as soon as possible,” James told The Borneo Post here yesterday.

He said he had sent an official letter to Chief Minister Datuk Patinggi Tan Sri Adenan Satem and suggested for a moratorium on logging and plantations for the said area.

“In the letter, we explained our fears that the park might be officially established after the logging concessions have expired.

“Thus, we emphasise the urgency of our request as the area consisting the last islands of primary forest are disappearing, such as the case of Ba Jawi.

“In 2010, the Ba Jawi area was still covered with pristine primary forest but last year, after five years of logging – the area has been severely degraded and the biological diversity has been reduced considerably.

“Only a few areas in Selungo have remained unlogged today and are under immediate threat of being logged in the coming months,” stressed James.

Thus, he seeks the support of the chief minister to approve the area immediately as the Baram Forest Reserve, the last remaining intact rainforest in the state.

“We hope that he will hear our voices and stop all logging activities in the upper Baram in order to save Sarawak’s last islands of unlogged forest and to realise a park,” said James.

James said the Penans of the area still depend on a sound environment, a rainforest that could provide them with their needs.

“Our identity and social wellbeing depend very much on our ancestral lands, the territories our fathers and grandfathers lived on. These forests are our history, our present and are meant to be our future,” said James.

He reiterated that the Penans’ traditional way of living has been threatened by uncontrolled logging activities that has started in the 1960s.

“Since Independence we have been demanding and struggling for our Native Customary Rights to land which have not been acknowledged. We people of the forest, we do not have any means to make our voices heard.

“We know that there are international regulations that give us the right to information and consultation. The world is becoming more and more aware of the negative social and environmental consequences of these logging impacts, which could end of our way of living,” added James.

He also lamented that several of their communities had written letters to the government and no one seemed to acknowledge.

“As we do not have any means to make the government accountable, we put our hopes on our chief minister to strengthen democracy and listen to our voices,” added James.