Wednesday, December 8
You are at:Home»News»Sarawak»Reduce shark fin consumption through ‘My Fin My Life’ drive 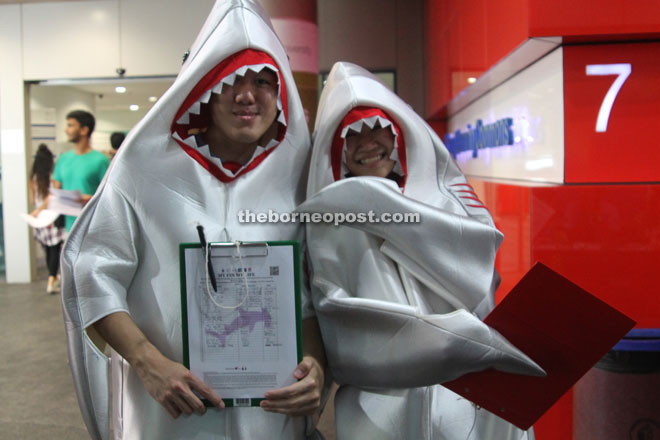 The signing was formalised through the presentation of a pledge certificate to Gavin Gomez, director of External Relations, Development and Alumni (ERDA), Monash University Malaysia by Chi Chi, WWF’s international mascot, according to a press release from World Wide Fund for Nature-Malaysia (WWF) yesterday.

It said Malaysia is ranked the world’s ninth largest producer of shark products and third largest importer in volume terms, according to the Food and Agriculture Organisation of the United Nations (State of the Global Market for Shark Products report, 2015).

WWF-Malaysia’s executive director Dato’ Dr Dionysius Sharma said: “We are happy to collaborate with Monash University to promote sustainable seafood practices. We hope this move will inspire other corporate bodies to participate and take this campaign to the next level.”

At the ceremony, Gavin said: “We view this pledge as an extension of our efforts to create a sustainable environment for students and staff at Monash University Malaysia. We aim to inspire our students to be responsible global citizens.”

Denise Westerhout, WWF-Malaysia Market Transformation Initiative (MTI) Lead and Monash University alumna explained: “This commitment is in line with the WWF-Malaysia’s MTI programme to encourage corporations to commit to sustainability. We urge the public to take a pledge against shark fin consumption through a ‘Break the Soup Bowl’ challenge to cease consuming shark fin products (mainly in the form of soup) through website www.myfinmylife.com

The awareness aims to drive public commitment to the endangered species leading to Shark Awareness Day on July 14 this year.

It is estimated that at least 1.4 million tonnes or 100 million sharks are killed per year. Global shark tourism generates revenue of around US$314 million annually and is expected to keep growing to $780 million annually over the next 20 years.”

Sharks are at the top of the marine food chain, keeping the fish population in check and healthy by eating old, sick or slower fish. Only stronger and healthier fish remain to reproduce which leads to healthier fish in the seas.

Business and public activities for the campaign have been planned in Klang Valley, Sabah and Penang until July 2016.