Tuesday, August 16
You are at:Home»News»Sarawak»Bus catches fire at Bintulu-Miri Road, all passengers safe 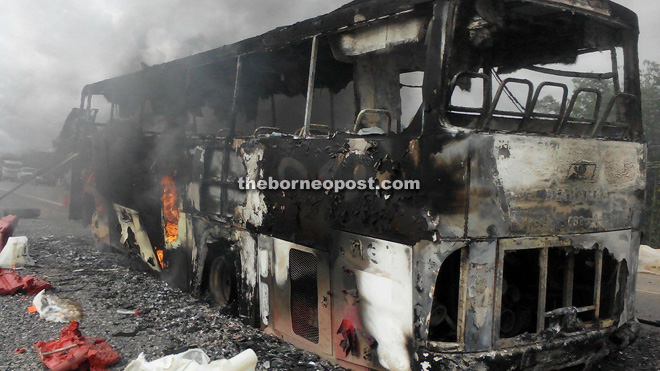 All that is left of the passenger bus after the fire.

BINTULU: Fire reduced a bus to a charred frame in an incident at a section along Mile 30 of the Bintulu-Miri Road yesterday.

According to Bintulu Fire and Rescue Department, they received a distress call at 3.13pm.

“We immediately despatched seven firefighters, led by Hashim Norshidi, to the scene which was located 48.27km from the station.

“Our men arrived there around 4pm and managed to put out the flames in 26 minutes.

“No passenger was hurt,” a department’s spokesperson said.

It is said that the bus was on its way to Miri from Bintulu when the incident occurred.

“All passengers managed to escape from the fire and later, continued their journey to Miri via another bus,” the spokesperson said.

Investigation on the cause of the fire has been launched.