Wednesday, February 1
You are at:Home»News»Nation»Malaysia, China agree to settle S. China Sea issues through DOC
For the freshest news, join The Borneo Post's Telegram Channel and The Borneo Post on Newswav. 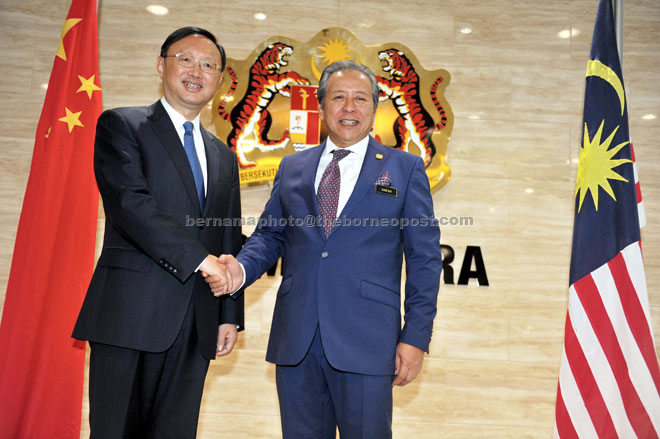 Anifah (right) receiving a courtesy call from Yang at his office at Wisma Putra in Putrajaya. — Bernama photo

Malaysian Foreign Minister Datuk Seri Anifah Aman said the agreement was reached at his meeting with visiting China State Councillor Yang Jiechi after the latter called on him at Wisma Putra here yesterday.

Speaking to reporters after the meeting, Anifah said the issues discussed at their meeting included the encroachment of Chinese fishermen into Malaysian waters.

“We raised our concern and he (Yang) said he will look into it. We believe that between friends we should be able to find solutions.

“We (Malaysia and China) are not exactly neighbours but we share the same South China Sea. So we are bound to have that kind of problems,” he said.

Anifah said Malaysia faced the problem of fishermen encroaching into its waters even with Indonesia because of overlapping areas.

“Therefore, what we (Malaysia and China) have promised is to settle all issues through the DOC and speed up the completion of the COC,” he added.

In March this year, it was reported that about 100 China-registered boats and vessels had been detected encroaching into Malaysian waters near Beting Patinggi Ali in the South China Sea.

It was also reported that the Malaysian Foreign Ministry summoned the Chinese Ambassador to Malaysia, Dr Huang Huikang, to provide some clarification and to register Malaysia’s concern over the matter.

Besides China, Asean countries involved in the overlapping territorial claims in the South China Sea are Brunei, Malaysia, the Philippines and Vietnam.

The overlapping territorial maritime claims had resulted in the signing of the DOC in 2002 between Asean and China to pave the way for and draw up the COC as a guideline to avoid any friction in the area.

Elaborating on Yang’s visit, Anifah, who regarded the one-time China foreign minister as a close friend, said the visit reflected the close ties between China and Malaysia.

“Because of Malaysia’s close relationship with China, we (both countries) sincerely believe that we should be able to talk to each other about problems that we may have, provided we continue to keep the communication and engagement open,” he said.

Yang arrived yesterday for a two-day working visit. Yang’s visit is the fourth to Malaysia in his capacity as the State Councillor. He had visited Malaysia five times as Foreign Affairs Minister, between 2007 and 2012.

According to a Wisma Putra statement, Yang’s visit reflected the close relations between Malaysia and China and the strong desire of both countries to strengthen the ties.