Wednesday, July 6
You are at:Home»News»Sarawak»Siblings in shock after car destroyed by fire 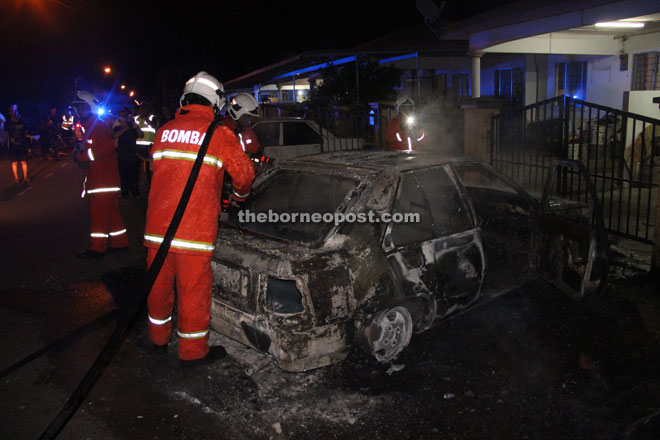 Firemen working at the scene.

MIRI: Two sisters in their late 30’s were just reaching home in Desa Senadin on Wednesday night with a three-year-old son of one of them when the car they were travelling in burst into flames.

“We were shocked,” said Agnes Jok shaking with fright when met by The Borneo Post that night.

It was learnt that they had just arrived home around 8.20pm after going to a nearby 1Malaysia clinic.

“Prior to the incident, my sister accompanied me in sending my son to a 1Malaysia clinic and upon our arrival at the house’s compound, both headlamps of the car suddenly shut down by themselves,” she said.

That night Agnes parked her car outside the car porch.

“Minutes after we stepped out from the car, we spotted plumes of smoke and flames issuing from the car’s dashboard,” she said.

They shouted for help and their neighbours rushed to the scene.

The flames got more intense and engulfed the car, causing small explosions.

One fire engine from Lopeng Fire Station was mobilised to the scene after being alerted on the incident at about 8.26pm.

The cause of the fire has yet to be determined.