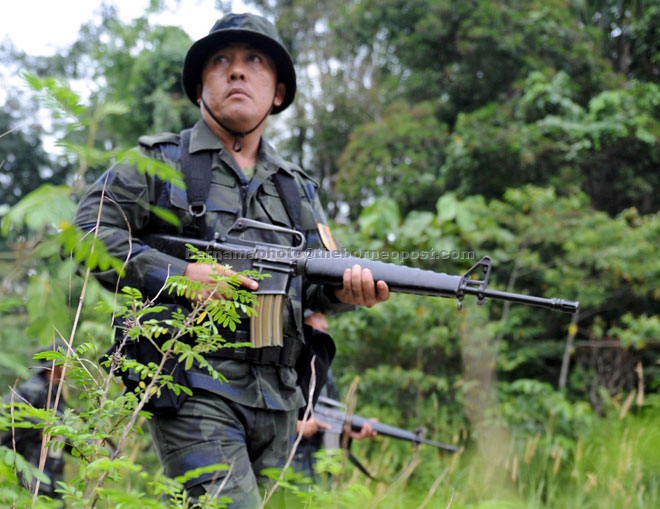 A General Operations Force (GOF) member from the 11th Battalion in Batu Kawah conducts a routine patrol along the checkpoint boundary in Telok Melano, Sematan which shares the border with West Kalimantan, Indonesia. — Bernama photo

KUCHING: Porous border areas between the state and Kalimantan, Indonesia have been blamed for the increased use of firearms in robberies and murder cases as well as rise in drug abuse cases in the state.

Deputy Home Minister Masir Kujat said smugglers could easily cross over using illegal entry points, but due to the current economic slowdown, the federal government has been unable to allocate the necessary funding to fence these critical stretches.

“We hope that we will be able to implement it in the next five years to minimise illegal activities, especially related to smuggling of goods and human trafficking,” he told The Borneo Post yesterday.

“It’s going to be costly, that’s why we can’t implement it now. However, the security along the border is not compromised because we have the Border Security Agency (BSA) made up of the police, army, Customs and Immigration.

“But even though we have the BSA manning our border areas, we still need more personnel as well. On top of that we need to put up the fences as well,” he said.

The Sri Aman member of parliament said it is worrying to note the rise in smuggling of drugs and firearms across the border.

“How serious it is, we do not know because our border area is very porous,” he added.

When contacted, Ministry of Domestic Trade, Co-operatives and Consumerism state director Datuk Stanley Tan said the smuggling of what used to be high demand goods across the border such as rice and sugar has declined drastically as both are no longer subsidised by the government.

However, liquefied petroleum gas (LPG) cylinders are still in demand due to the higher retail price in Indonesia.

Masir and Tan were both commenting on Armed Forces chief General Tan Sri Zulkifeli Mohd Zin’s recent statement that the Armed Forces would step up operations as well as patrols along the border in anticipation of an increase in smuggling, especially of firecrackers and daily essential items due to Hari Raya Aidilfitri.