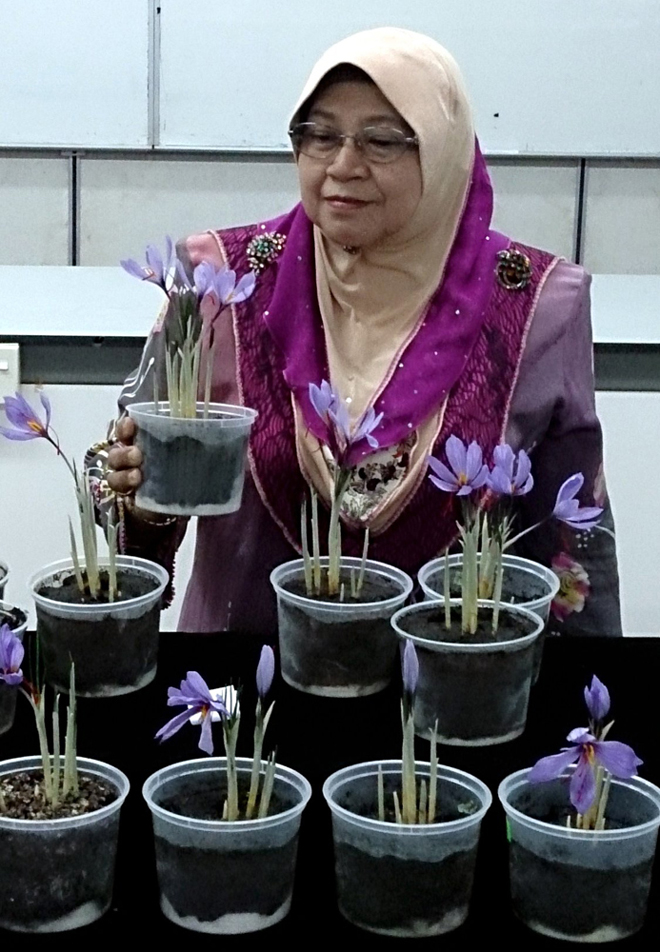 KUALA LUMPUR: Saffron (Crocus sativus linnaeus) is the most expensive spice in the world, and Malaysia is currently trying to grow it in its own backyard.

Dubbed the king of spice, the delicate crimson threads that make up the spice are the stigmas of its flower, plucked and dried.

Saffron crocus, which has for thousands of years been used as the main spice in dishes across Western Asia, costs more per ounce than gold.

It can only be grown in countries with four seasons or in Mediterranean climates, such as in Western Asia.

However, a team of researchers from the Science Faculty of Universiti Malaya (UM) headed by Prof Dr Rosna Mat Taha have recently succeeded in an early experiment to grow the saffron crocus in Malaysia.

The corms, grown in vivo in a culture room, started flowering for the first time in November last year through January this year.

The reason for the steep price of saffron can be attributed to its labour-intensive harvesting methods.

The stigmas from some one-hectare field of flowers need to be delicately hand-plucked to acquire just five to seven kilogrammes of saffron.

Every saffron flower only has three stigmas. This means around 1,000 flowers have to be carefully plucked to harvest 10g of stigmas.

The success in growing saffron crocus for the first time in a tropical climate is promising.

However, there has to be further research before it could be grown on a large scale in Malaysia, said Rosna.

She and her team, comprising members Nordiyanah Anuar, Noraini Mahmad, Asif Khan, Dr Sadegh Mohajer and Nor Amirah Md Nor, had been working on the project since 2014 with the help of a UM grant.

“Saffron can only grow in four-seasoned and Mediterranean countries like Iran, which is the largest producer of saffron crocus in the world. Turkey, Kashmir (India) and European countries like Spain and France also produce saffron, but in smaller quantities.

“The ability of saffron to bloom in Malaysia indicates a possibility for commercialisation,” she said to Bernama in an interview.

Also called ‘red gold’, saffron have been used not only in dishes but also as dye and perfume as well as in the medical field.

The spice contains safranin, a potent anti-cancer and antioxidant compound. Among the health benefits of saffron is that it stimulates brain cell growth in humans and strengthens the memory.

Many old Islamic medical journals touted the benefits of saffron, claims which have all been verified by modern medicine.

In India, saffron is often used to treat indigestion. It is rich in vitamin B2 and riboflavin and studies have shown that it can help prevent cancer of the digestive system.

Saffron has also been used as an antidepressant for those suffering from bouts of depression.

Saffron crocus is a sensitive plant requiring proper care. It propagates via corms and flowers at the beginning of autumn, when the temperature is between 11 and 18 degrees Celsius.

In Iran, the flowers bloom during the months of September to November. The same corm can produce flowers for 10 years.

However, corms are usually replaced every five years to ensure high quality stigmas.

Rosna said initial research showed success that the plant grew well in black soil and would start flowering at a temperature of between 15-20 degrees Celsius.

It was also found that nutrients in black soil were highly favourable for growing saffron.

“After around two months, the saffron (grown in-vivo) started producing purple flowers and released a scent similar to those grown in its country of origin. In this research, the saffron flowered in November through January, slightly differing from those in Iran, which flowers in autumn (September-November),” she explained.

The growth and flower production were also influenced by the pre-treatment of the corm.

The researches are now studying ways to improve the growth and flowering stages via tissue culture.

Rosna said saffron crocus reproduces at a very slow rate and produces very few new corms naturally. Therefore, using tissue cultures for the micropropagation of the plant was a crucial step towards solving the problem.

“This biotechnological method allows the plants to be grown on a large scale. This is huge potential for the country’s economy,” she said.

The research has been acknowledged locally and internationally.

Last year, it won the silver medal at the iCompEx 2015 competition in Jitra, Kedah.