Wednesday, October 27
You are at:Home»News»Sarawak»Stop calling Sarawak a state 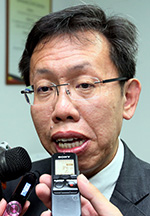 KUCHING: Chief Minister Datuk Patinggi Tan Sri Adenan Satem has been urged to refer to Sarawak as region in Malaysia and not a state within the federation when negotiating with the federal government in the devolution of power and autonomy.

This is because together with North Borneo (Sabah), Singapore and the Federation of Malaya, Sarawak was one of four regions which formed Malaysia in 1963.

Local Government Minister Datuk Dr Sim Kui Hian who is also president of Sarawak United People’s Party (SUPP) said this at the launching of the book ‘The Grand Design’ by Sabahan researcher Zainnal Ajaimain at his party’s headquarters here yesterday.

Dr Sim argued that if Sarawak is serious about fighting for its autonomy and reclaiming its status as a region in the nation as written in the MA63, Adenan should take the lead in making this stand.

“When talking about Sarawak’s fight for autonomy, I see that Sarawak is still referring itself as a state in Malaysia that is not consistent. Sarawak should refer itself to just Sarawak from now on and not Negeri Sarawak (Sarawak state) in order to be seen as serious in fighting for autonomy,” he added.

To stress this point Dr Sim called for the word ‘state’ to be dropped when referring to Sarawak’s legislative assembly or government.

He said SUPP had been in the forefront in fighting for Sarawak’s rights as entrenched in the Report of the Inter-Governmental Committee 1962 (IGC) and the MA63.

The SUPP president added that it is imperative for the people of Sarawak especially the younger generation to understand not just the MA63 but also the other three documents namely the IGC, Cobbold Commission Report and Malaysia Act 1963 that spell out the conditions the Federal Government has to adhere to in the formation of Malaysia.

IGC for example includes the safeguards for the special interests of Sarawak and Sabah based on the recommendations made in the Cobbold Commission Report.

The safeguards include religious freedom, education, taxation, judiciary and control of immigration.

Dr Sim said the special rights for Sarawak and Sabah spelt out in the agreement had been eroded over the years and they should be given back to the two regions.

“We are not being greedy here we are just asking what was promised to us. There is no renegotiation as they were already promised to us before the formation of Malaysia and they are rightfully ours,” he said.

However, Dr Sim stressed that he is not against the formation of Malaysia but is fighting for what the rights of Sarawak and Sabah as stated in the MA63 and other documents related to the formation of the nation.

He claimed that he had spoken with the Prime Minister Datuk Seri Najib Tun Razak recently about the matter and he agreed that Sarawak and Sabah should get back their special rights as written in the agreement and the reports.