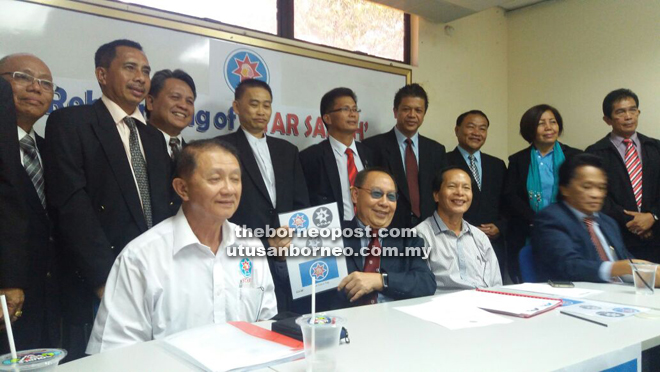 Jeffrey at the press conference showing the STAR party logo with members of the party’s committee.

KOTA KINABALU: STAR Sabah has been reformed and re-branded as a full-fledged Sabah-based political party under the name Parti Solidariti Tanah Airku.

“This means that we are no longer an outside party and we are an independent local party. After 30 years, I finally have a party, but it is not about me but about the fight. I have been moving from party to party to bring up the (people’s) struggle. It has not been easy when I was dubbed a ‘katak’ (frog). But now, I will no longer jump because I finally have a vehicle to fight for the people,” he said.

Jeffrey added that he was prepared to do everything necessary to fight for what he felt was due for Sabah, even if it meant going to jail.

The re-branding exercise basically includes changes in the party logo which now has a seven-pointed star with human element (handshake grip) to replace the nine-pointed star; the name change which now emphasises on solidarity in line with the need for unity and solidarity to be consistent with the slogan ‘unity is duty’; a new flag which incorporates the new logo; and the party’s focus on Sabah.

This move has encouraged STAR Sabah to do its own reform and re-branding, said Jeffrey.

Following the decision, REFORM and STAR are now two separate legal entities with their own party constitution as approved by the Registrar of Societies.

Along with the re-branding of STAR is a unique Constitution that allows for organisational membership, meaning that non-governmental organisations (NGOs) and other political parties can also be members, said Jeffrey.

With its new membership criteria, Sabah’s existing political parties can now be united under STAR and use STAR’s symbol as a single symbol in the coming 14th General Election, he said.

“STAR believes in the unity of all Sabahans and the concept of ‘Sabah for Sabahans’ and ‘Sabahans for Sabah’ and the restoration of Sabah’s autonomy and rights for the benefit of future generations. STAR Sabah and my personal struggles for the restoration of Sabah’s rights as an equal partner in the formation of Malaysia with special rights and safeguards are clear-cut and unequivocal. However, in recent times, both detractors, troublemakers and traitors from both the ruling government and opposition parties have chosen to question and tarnish us,” he said.

He added that issues that have been raised to deflect from their fight for Sabah’s rights such as Article 6 of the Sabah Constitution allegedly interpreted to be restricted to Sabah parties and the importation of the party from Sarawak were no longer in question.

“The reform and re-branding of STAR in Sabah will answer them and lay to rest these false and malicious accusations,” he said.

Jeffrey further mentioned that their struggles have been proven right and correct with the stand taken by the Federal and Sarawak governments to restore Sarawak’s autonomy and administrative powers.

“Sabah’s position is no less inferior to Sarawak but the Sabah government has failed to show true leadership in seeking the restoration of Sabah’s autonomy and its rights and safeguards.”