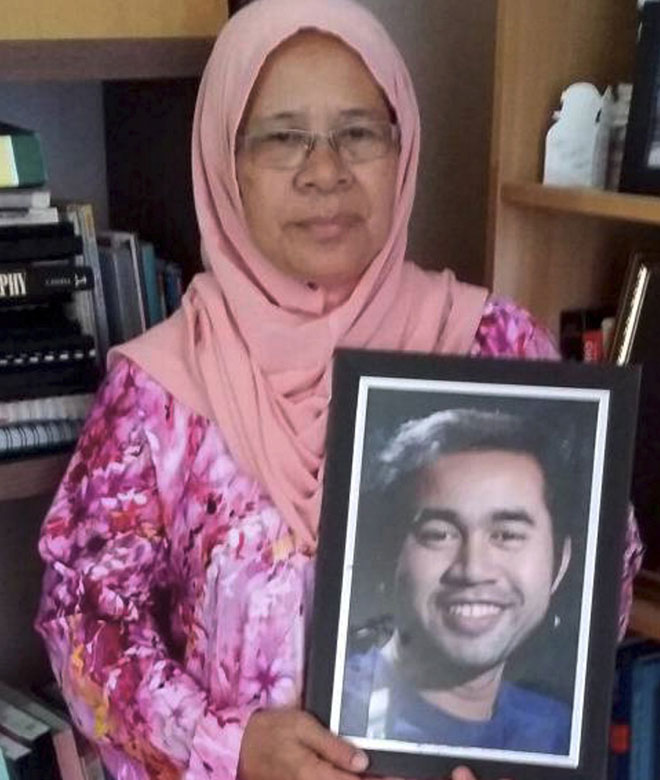 Junaidah showing a photograph of Mohd Ali, when met at her house in Kampung Jayor, Pagoh in Muar. — Bernama photo

MUAR: Yesterday marked exactly two years since the Malaysia Airlines (MAS) flight MH17 tragedy , but for the family of Mohd Ali Mohd Salim the memories they had with him still linger on especially during Hari Raya Aidilfitri.

His mother, Junaidah Basiron, 64, said it was never easy for her every time Aidilfitri came as she could not help but to recall memories she had with her son and family in preparing for the festivity.

“Every time during Hari Raya, he was the busiest person in the family from cleaning up the house, decorating, buying necessary items to cooking in the kitchen. He did all that to ensure (our) Raya preparations were complete without having to get other people in the family to do it,” she told Bernama when met at her house in Kampung Jayor, Pagoh here.

Mohd Ali was among 298 passengers and crew members who perished onboard MH17 when the plane was shot down in eastern Ukraine on July 17, 2014 while en route to Kuala Lumpur from Amsterdam.

The future Universiti Sains Malaysia lecturer was studying for a doctorate in Neuropsychopathology Development at Erasmus University in Rotterdam, The Netherlands.

His body was among the first group of MH17 victims’ remains flown back to Malaysia and was laid to rest at the Kampung Raja Muslims Cemetery, Pagoh on Aug 23 two years ago.

Junaidah, who is a mother to eight children, said her son would cook his favourite ‘sambal’ (spicy paste) for the whole family and friends who came to their house every time during Aidilfitri.

“He had learnt cooking from me. He was a meticulous person and a perfectionist in all matters including cooking.

“He would pound chillies himself because he believed that ‘sambal’ made from pounded chillies tasted better than grinded (using machine).

“In fact, his friends told me that they miss his delicious and authentic meals,” she said.

Junaidah said whenever her son flew to Malaysia for Aidilfitri, his suitcase was filled with souvenirs for family members and items for Hari Raya, such as bedsheets, fabrics and table cloth.

“He only carried several clothes for himself while most of his big luggage was filled with things for the family. I will never forget his words. He (Mohd Ali) said he did not want to trouble me and was willing to bear all problems by himself because all he wanted to do was to return the favour to his parents first,” she said in a sad tone.

She also said Mohd Ali loved to help others, be it material-wise or sharing knowledge. Recalling the last time she met her son, Junaidah said he kept repeating ‘malas nak balik’ (too lazy to go back) three times before he left for Amsterdam.

“All I know, he was a hardworking person and would not easily give up. I could not believe that was the last conversation I had with him,” said Junaidah.

For Mohd Zaki Mohd Salim, his brother’s generous smiles, down-to-earth personality and humble attitude were among the many traits that still lingered in the minds of their family members during every Aidilfitri.

“We miss him dearly… Whenever he came back home for Aidilfitri, he was the one with lots of stories,” he said when contacted by Bernama. Mohd Zaki, who is a police officer in Kuala Lumpur, said the family would hold a ‘yassin’ recital on July 17 every year as a remembrance for Mohd Ali.

“I have many fond memories with him because we used to live together when I furthered my studies in the capital city last time. (In fact,) there are too many memories that we will never forget,” he added. — Bernama

Previous ArticleBill murder: Suspect with ‘Dato’ title believed to be in Australia
Next Article 1,000 forgo Sunday rest to ‘Run for a Reason’