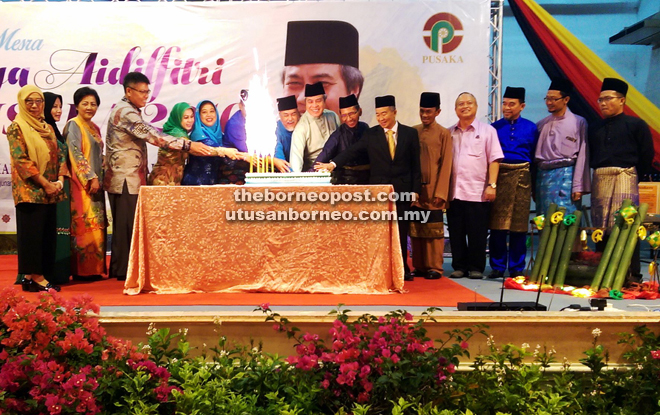 Awang Tengah (eighth right), flanked by Asfia (on his right) and Sarudu, together with Naroden (sixth right) and other guests cut the Hari Raya cake during the open house.

KUCHING: Sarawak’s total export earnings of timber and timber products fell 3.5 per cent to RM3.09 billion in the first half of 2016 (January to June) from RM3.20 billion in the same period last year.

Second Minister of Resource Planning and Environment Datuk Amar Awang Tengah Ali Hasan said uncertainty in major consuming markets such as Japan, India, Taiwan and China had affected the export of timber and timber products in the first six months of this year.

“The export value of timber and timber products to major markets has declined between four and 52 per cent during the same period,” he said at the Sarawak Timber Industry Development Corporation (STIDC) Hari Raya open house held at the old State Legislative Assembly complex here yesterday.

According to him, export to China recorded the biggest decline of 52 per cent, followed by Thailand (27 per cent) and Taiwan (26 per cent).

“Export to India and Japan recorded a decline of nine per cent and four per cent respectively.

“However, the export value to the Philippines, Middle East, Australia and South Korea increased by 74 per cent, 23 per cent, 27 per cent and 4 per cent respectively.”

Awang Tengah, who is also STIDC chairman, also noted that the export of plywood had decreased by six per cent to RM1.52 billion in the first half of 2016.

“Plywood accounted for 49 per cent of Sarawak’s total export earnings. Export value of sawn timber and medium density fibreboard (MDF) has increased by 23 per cent and 20 per cent respectively during the period under review.”