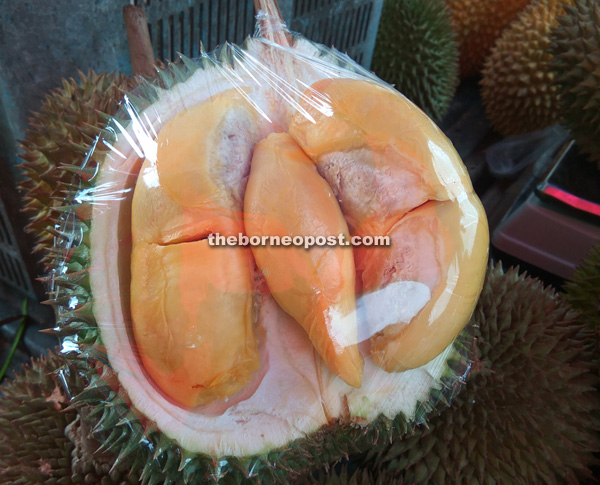 This year’s second durian season is producing less fruits than expected due to the hot weather.

MIRI: The arrival of the durian season has caused fans of the ‘King of Fruit’ to salivate in anticipation of tasting the creamy fruit, but a poor harvest and short duration may leave their cravings unfulfilled.

A durian vendor who only wanted to be identified as Ngieng said this year’s second durian season is rather slow.

“Earlier, durian flowers started to bloom. However, I believe that due to the hot weather, the flowers perished immediately. Therefore, flowers which successfully turned into durian fruit are limited in number; hence the expensive price.

“I know that the locals have been craving for durian after the first season in January. However, the weather has not been good, and demand is higher than supply, causing durian prices to inflate. I’m not sure how long this season will last, but I think it will end very soon judging from the amount of fruits,” he told thesundaypost.

The types of durian currently available are D93, D168, D24, D99, D101 and B2, sourced from Bekenu and Batu Niah, Ngieng said. He added that the poor harvest and short season had pushed up prices, to as high as RM45 per kilogramme for D168.

Ngieng said that it was difficult for him to give discounts to his customers due to the shortage of fruits as he was only able to make a small profit from his sales.