Sunday, May 22
You are at:Home»News»Sarawak»RM6 mln to transform dockyard — Abg Jo 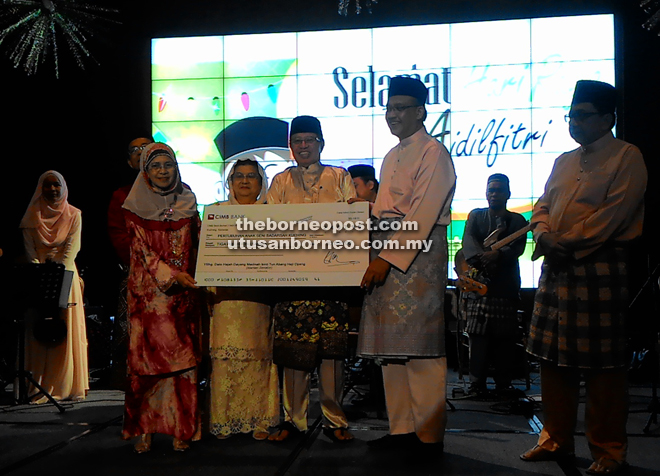 Abang Johari witnessing the cheque handing over ceremony from Madinah to Abdul Rahman. Jumaani is on Abang Johari’s right.

KUCHING: The federal government has allocated RM6 million to help transform the former Brooke dockyard along Lebuh Market into a local handicraft business and training centre.

“We will apply for the remaining sum from the state government to re-develop the place, making it almost similar to ‘Pasar Seni’ in Kuala Lumpur,” said Abang Johari on Sunday.

Abang Johari, who is also Minister of Tourism, Arts and Culture, said besides becoming a hub for local entrepreneurs to sell handicrafts and souvenir items, the proposed centre would also have training centres to teach locals to produce local handicrafts.

This, he believed, would auger well for the socio-economy of the people as the state’s tourism industry was gaining momentum due to the interest of foreign airline companies to fly direct to the state.

Abang Johari added that the transformation of the former Brooke Dockyard would compliment his ministry’s initiative to have a heritage trail from Kuching Waterfront and encircling heritage sites such as Brooke Dockyard, the first state mosque (now divisional mosque), SJK (C) Chung Hua School No. 4, Darul Kurnia and Jalan P. Ramlee.

On another matter, he reiterated that his ministry wanted to revive Sarawak Art Council.

“Then there’s the Sarawak Symphony Orchestra. We plan to have them perform in Asean countries and other places. This will in turn promote our state to countries such as Japan, South Korea and China.”

Meanwhile, he applauded PASBK for their effort in producing many talents in the performing arts scene over the years.

He said works were currently underway to construct a PASBK building as a platform for all villagers surrounding Jalan Datuk Ajibah Abol to gather and share their love for music, arts and culture.