Monday, May 16
You are at:Home»News»Sarawak»Transformer catches fire at Petronas LNG Complex in Bintulu 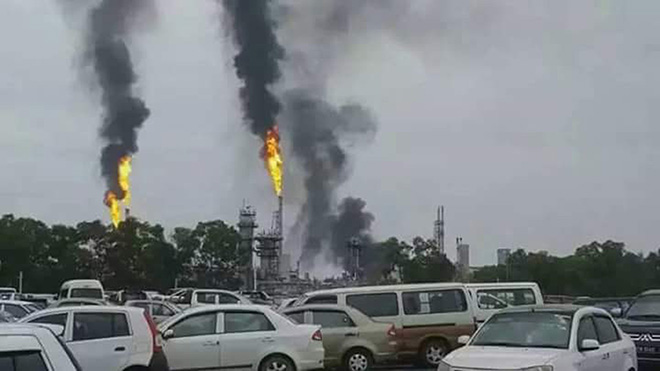 Black and white smoke billowing from one of the facilities at Petronas LNG Complex.

BINTULU: It was a panicky situation at the Petronas LNG Complex in Tanjung Kidurong near here yesterday when one of the transformers there caught fire.

There was no report of injuries as all personnel were evacuated from all facilities, according to a statement released by Malaysia LNG (MLNG) Sdn Bhd Public Affairs Department yesterday.

“A fire was detected at one of the transformers in Substation No 42 after which, MLNG’s First Intervention Team (FIT) was immediately deployed to address to the situation.

“The fire was put out by around 10am, and the ‘all-clear alarm’ was rung to confirm that the situation was under control,” the statement read.

MLNG also stated that the incident neither posed any impact to the environment, the general public, nor disruption to the liquefied natural gas (LNG) production.

“After the completion of safety and integrity checks, the plant resumed normal operations.

“MLNG has initiated an investigation to determine the cause of the incident in line with international safety standards and practices. We will strive to ensure the safety of our people and assets as they are our highest priority.” The incident yesterday became viral on the Internet, where photos that showed black and white smokes billowing out of one of the buildings in the Petronas LNG Complex, had been circulating across several social media platforms.