Thursday, July 7
You are at:Home»Features»Kelulut honey — a health elixir from stingless bees 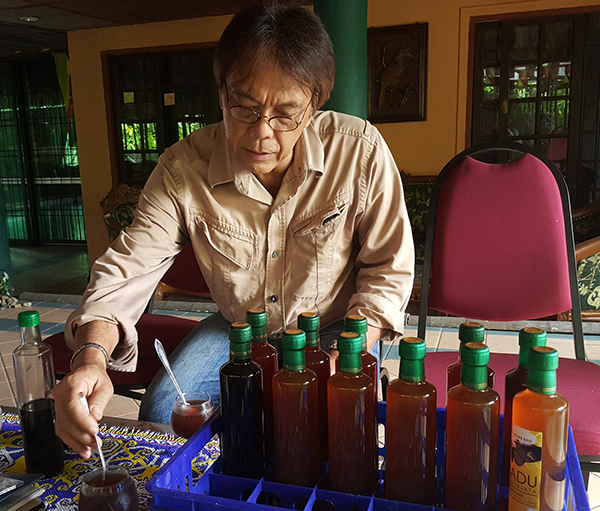 AFTER chatting for about 10 minutes, he excused himself to get some drinks for us from the house.

While he went in, I walked around to see his simulated empurau habitat which he has been maintaining for about 10 years.

About a minute later, he came come out with a small dark-maroon glass container and 1.5 litres of cold water and placed them on a table outside the verandah across the facade of his house.

Moments later, he went into the house again and came out with two glasses and two tablespoons. I began to wonder what was he doing when he walked into the house a third time. Before I could figure it out, he emerged and walked towards the table, carrying a half-full plastic basket, containing some nicely packed bottles of dark-gold coloured juice.

While I was busy taking pictures of his empurau reared in a cement tank, he sat on his chair and invited me to join him, saying: “I want you to try my kelulut honey.”

My first thought was “is it kelulut honey from stingless bees that I once wrote about?”

Then I replied: “Ok, sure, thank you. After all, I have never tasted this honey before in my life.”

So he dribbled slightly more than a tablespoonful into a glass, poured cold water in and stirred it. Next, he moved the glass towards me, inviting me to try the concoction. I lifted up the glass and drank.

Yes, the drink was sour compared to normal honey which is very sweet.

Curious about the taste, I asked if I could taste the pure honey in the bottle and he allowed me to have a scoop.

The pure honey tastes sourish sweet and is also runny, unlike normal honey which is sticky. 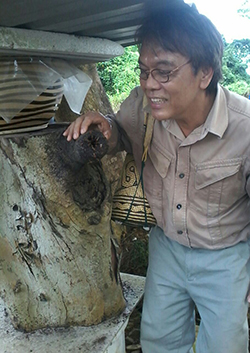 Elli taking a close look at the castles of a bee colony.

I guess this stingless bee honey must be having much less sugar content than regular honey – hence the tangy flavour. It’s also not as “heaty” as normal honey.

I wrote about the rearing of meliponines (stingless bees) sometime in 2014 and have always assumed the taste of kelulut honey, derived from plant resins the bees use to build their hives and honey pots, is sweet.

So I looked towards Dr Elli Luhat, sitting in front of me, and asked: “Why is your honey sour.”

He smiled: “The taste of this honey varies at different times of the year, depending on the flowers and trees the bees visit. But generally, the taste of kelulut honey is quite different from that of ordinary honey bees. It’s not as sweet as other varieties of honey.”

Elli, who is a forest scientist, said the taste was greatly influenced by the nectars or flowers the bees were feeding on, adding that sometimes, it could taste slightly sweet while at other times, like some wood or wild flowers.

“If the bees feed on sweet flowers within their rearing environment, then the honey can taste slightly sweet,” he explained.

Elli’s kelulut honey is collected from a farm along Kuching-Serian Road. Most of the time, the bees feed on gaharu flowers which the apiarists have integrated with other plants on the same piece of land.

Right now, Elli and his partner collect about 200 litres of kelulut honey per month from the 3,000 boxes or colonies at the farm. The honey is sold either to friends or exported to Sabah.

“We started rearing these bees in 2014 and it took about six months for each colony to build their honey pots. Based on my experience, the period for each colony to start producing honey also depends on the availability of nectars while the quantity of honey produced depends on population size,” he said.

According to Elli, the queen bee plays a very significant role in the growth of the colonies.

“The queen bee is the production house. The more productive the queen, the bigger the population, and the more the honey produced.”

He said what the queen bee produced were actually worker bees whose task is to collect nectars and bring them back to the castles (boxes).

“To fill the honey pots or bags, a lot of worker bees are needed. If you could have three or four queens inside each box, then you could have millions of bees and a great deal more honey.”

However, Elli pointed out that it was sufficient to have two queens in each colony.

“So our immediate challenge is to take out some of the queens from the existing boxes – if there are more than two – and put them in separate boxes to multiply. I will have to identify the queens and also the best plants for the colonies to feed on.”

He believed after almost two years, some of the castles could be having more than two queens since the total bee population at the farm now runs into the millions. The queens are bigger and normally live in a special place within the colony.

Aside from gaharu trees, Elli is also looking into planting other trees that bear flowers – most probably sweet flowers.

“The bees need to feed on nectars otherwise there will be no honey to fill the pots,” he noted.

Elli stressed there is no compromise on the quality of their honey, assuring they would only sell pure honey with high propolis (bee-glue) contents.

Propolis is produced by bees through their saliva mixed with bee food such as pollen, bark, tree shoots and flowers. The bees gather resins from pine and other cone-producing evergreen trees, blend the resins with wax flakes and pollen, then bring them back to the hives where they use the sticky mess to patch holes, seal cracks and build panels.

Propolis which determines the quality of the honey, is said to have properties that boost the immune system. The bee-glue contains all 16 amino acids, glucose, vitamins A, B, C, D and E, bioflavonoids and minerals. Bioflavanids improve and repair the body systems of people and livestock.

“In the wild, because of the propolis, other insects never attack the honey. The glue is a natural insect repellant,” he added.

According to Elli, it’s easy to test whether honey is diluted or pure.

“To test for purity, just drop some of the honey on the floor, and over time, when you see ants eating it or fungus growing on it, then the honey is not pure. This indicates sugar or sugar cane juice could have been added after the honey had been diluted to increase the quantity.”

He believed one of the benefits of kelulut honey was that it could boost energy and strength, given that stingless bees are active all year round.

“You can just drink kelulut honey without mixing with water or any food. It’s good to drink it daily,” he said.

In addition to its unique flavour, there are also numerous studies conducted onthe medicinal values and health benefits of kelulut honey on the basis that stingless bees produce honey and propolis rich in antioxidants.

Propolis can function as anti-fungal, anti-fungus, anti-bacterial and anti-inflammatory remedies and is commonly used as an active ingredient in cosmetics, creams and tablets.

Antioxidants have many functions, especially in containing free radicals and preventing cancer. 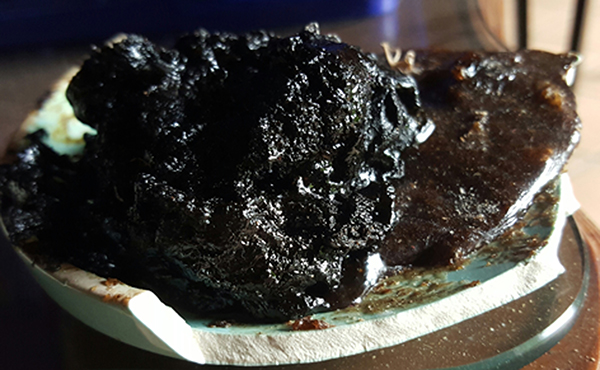 Propolis produced by the stingless bees.