Sunday, May 22
You are at:Home»Features»Unlikely partners – heritage and digital media 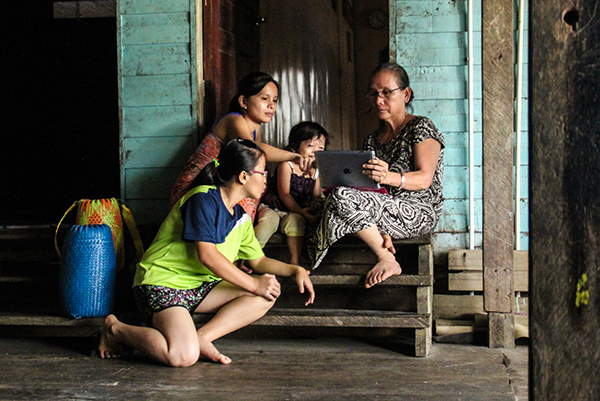 Villagers look at an iPad in Long Luyang.

HERITAGE – it feels more than a word which simply describes an object, be it a historical building or a cultural practice.

It’s an important aspect in helping to shape who we are, however we choose to define ourselves, culturally or geographically. Usually we think of Unesco world heritage sites when speaking of preserving heritage. And these buildings, cities or museums are the physical spaces of our heritage.

Traditional museums have an object-focused approach where the explanations frame the objects. This limits the visitor’s experience to curated information about objects, people and landmarks. The curator is the only voice, imparting information and facts, which often lacks alternative voices and feels impersonal.

This is why contemporary museums have been quick to adapt digital media as part of the visitor experience since digital media is well suited to document and preserve the plurality of voices, especially when it comes to our cultural heritage.

Swinburne Sarawak has been pairing these at first seemingly unlikely partners – digital media and heritage – with results which help engage the audience both as consumers and participants. Their multimedia design students have been inspired by the folklore and rituals from indigenous communities and using them as concepts for their gaming apps.

Rituals have a symbolism and figuring out their meaning is a good way to hide clues.

In their game ‘Tou: The Sacrifice’, which won the Microsoft Imagine Cup Asia Pacific in 2015, the game concept was inspired by a folklore from the Melanau community where a little girl gets lost in the forest. Players have to search for clues and solve the puzzles to proceed to the next level. Another game

– ‘Beads of Borneo’ – engages the audience to play while also explaining the symbolism of beads.

In Borneo, the pattern of the beads is symbolic and believed to hold spiritual and healing powers. In this game, players need to collect beads within a timeframe. They can also explore the meaning of each bead. This is one way of engaging a younger audience – learning through play or gamification.

Social media apps like Facebook enable people to become more inter-connected by creating digital communities. In Sarawak, there are Facebook groups such as ‘The Story of Kuching,’ ‘Memories of The Past,’ ‘Do You Remember?’ and ‘The Story of Foochows’ with an estimated average of 11,000 members each. 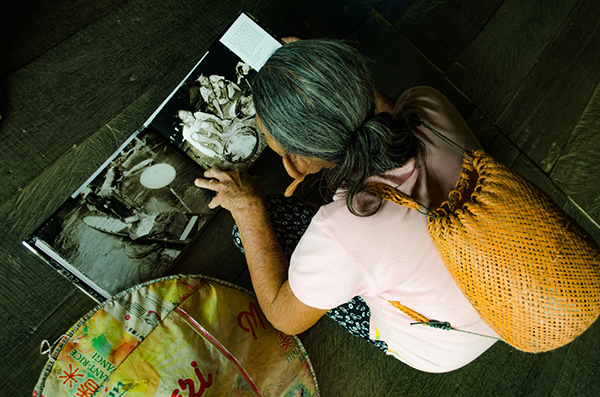 A woman studies photos in a book in Long Luyang, Tinjar. – Photos by C Horn and R Riman

Aurelia Liu, as part of her Swinburne Sarawak Research Master’s project, is designing a mobile application to co-create and collect digital heritage stories.

“These online communities are mostly heterogeneous, consisting of people of various age groups, backgrounds, locations and levels of knowledge. But they come together for a common reason – interest for their shared history in their local community. As the number of members and postings continue to grow rapidly, it reflects an increasing interest and curiosity for heritage stories in the local community – stories told by themselves.”

Motivated by nostalgia or enthusiasm for history, social media platforms have enabled people to come together and share stories about their cultural heritage.

“People talk about memories – stories of their grandparents, old rendezvous places or old friendships. In that process of learning and reflecting about the past, they find a sense of their identities,” Liu noted.

With social media technologies, heritage also encompasses people and their stories, and the activity of remembering together. There is now a platform for heritage counter narratives that is collective and multi-faceted. It connects and empowers the local communities where there is a treasure trove of stories yet to be told and heard.

However, the nature of information shared on social media is ephemeral and cluttered with endless postings every day. It creates a problem where information is disorganised, repetitive and difficult to retrieve. As such, potentially useful information is gone under the ever-growing pile of postings and comments.

Liu is designing a mobile application to co-create and collect digital heritage stories.

The aim of Liu’s research is to design a simple-to-use and engaging application that extends the experience of social media technologies – with considerations on how information can be arranged in a better way to make it searchable.

While this project is an urban heritage project, Swinburne Sarawak has another rural project with Swinburne Melbourne in the upper Baram area. The researchers from Melbourne and Sarawak will train people from rural communities in the skills used for digital storytelling, enabling them to record and document their cultural heritage, language and traditions.

Digital technologies and mobile access have become an important feature in people’s lives in the upper Baram area. After all, the more remote a village, the more important it is for people there to be connected to their families in the city or overseas via mobile phone, messenger apps and social media.

Social networking sites such as Facebook and apps like WhatsApp and WeChat are very popular for this reason, even though people sometimes struggle with lack of Internet access. In this region, you sometimes have to climb a mountain, drive to the next village or take a boat ride to check your email, make a phone call or receive an SMS.

Dr Christine Horn from Swinburne Melbourne said, “Our project aims to empower the local communities to share their histories, songs, traditions, beliefs, objects, stories, folklore and individual perspectives to the rest of the world through digital media.”

In the first phase, they identify the opportunities and obstacles people face when using digital media, and people’s experiences and practices. Among other topics, the research focuses on connectivity and lack of access, skills acquisition and device ownership. 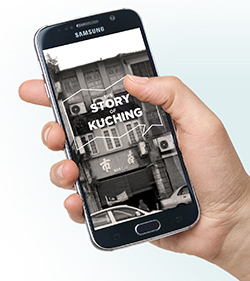 Liu’s Facebook research project ‘The Story of Kuching’ is seen on a mobile phone screen.

In March 2016, the team covered areas around Bekenu-Sibuti, Sepupok-Niah, and along the Tinjar River, a tributary of the Baram River.

The team will set out on further trips to the Baram region later this year for in-depth investigations.

Data gathered from the baseline study will be used to plan a series of digital media workshops. These workshops will train people in rural communities in the skills used for digital storytelling, enabling them to record and document their cultural heritage, language and traditions.

After all, people already use Facebook and Instagram, and many may be interested in learning additional skills to promote their communities online.  Future training could also include how to use Internet tools to attract tourists to visit the region. In this way, the project may contribute to a budding ecotourism industry in a region currently off the beaten track.

What all these projects at Swinburne Sarawak have in common is how communities reframe their experience and understanding of heritage through social media and participatory practices.

Heritage today is seen as far more than antique artefacts and historical buildings. It is about making sense of our memories and developing a sense of identity through shared and repeated interactions of a shared past. Students and researchers of digital technology are really embracing the new when exploring the past. 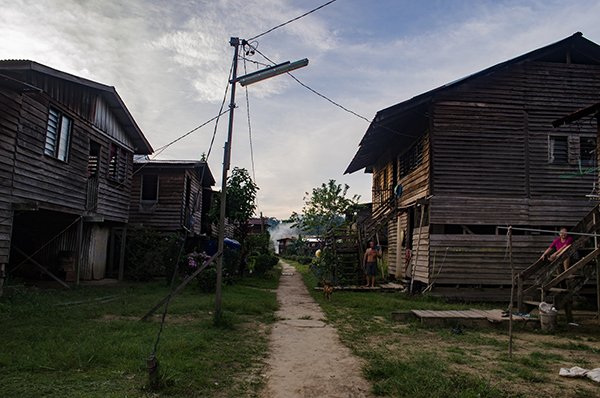 Dr Christine Horn with be talking about her project – Digital Media and Indigenous Heritage – at the Museum Shop and Café on Aug 17 at 5.30pm. RSVP via the Facebook page – Sharing my Passion.