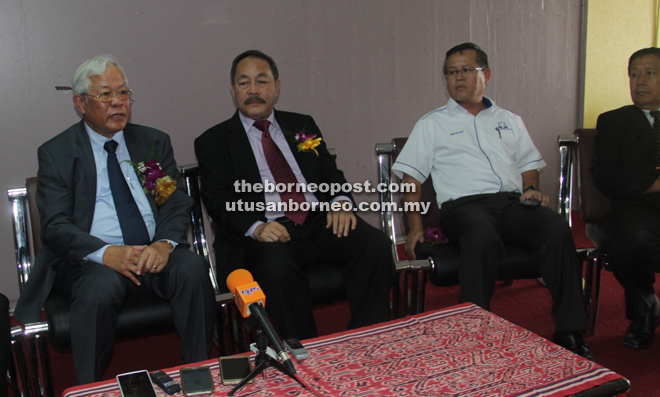 Minister of Youth and Sports and Solidarity Dato Sri Michael Manyin hinted the rewards could be more if Pandelela were to land gold in next week’s women’s individual 10m platform.

The state cabinet, Manyin told reporters yesterday, was expected to deliberate on the rewards and incentives for Pandelela, a Bidayuh lass from Kampung Jugan in Bau.

“I cannot speak on behalf of the state government but I believe there will be something for her. In 2012, when she won bronze medal in the London Olympics, she was given some financial rewards and a scholarship.

“The achievement means that she and her diving partner are the second best in the world. Hopefully, she delivers gold in her individual event next week. We pray hard for that,” he said when met after the swearing-in of councillors of Serian District Council at Dewan Masyarakat Serian yesterday.

Manyin said Tasik Biru assemblyman Datuk Henry Harry Jinep had promised a RM50,000-incentive to Pandelela if she won gold in the Olympics.

“We are very proud of her. We are very happy, not just among the Bidayuhs but the whole of Malaysia, especially Sarawakians. This is the second time Pandelela won Olympic medals.

“We congratulate them (Pandelela and diving partner Perak-born Cheong Jun Hoong) for bringing honour and pride to Malaysia,” he said.

Meanwhile, Henry when contacted, said the RM50,000-incentive pledged to Pandelela to win an Olympic gold still stood because there is another chance to achieve this in the women’s individual 10m platform next week.

Henry, who personally pledged the incentive during Pandelela’s 23rd birthday in March, said he and other members of the Bidayuh community believe Pandelela could achieve the feat.

“She has given her best and the community expects nothing less than an outstanding performance she has delivered to this point.

“My RM50,000-incentive, which I pledged early this year, still stands and I will be watching her upcoming event with anticipation,” he said.

Henry said he had promised the sum during her 23rd birthday on March 2 as an incentive for giving her best at the games.

He said she carried the fighting spirit of the Bidayuh community and had riled them up into following the game closely.

“I believe she will do it…she has the ‘semangat’, the fighting spirit to do this and we are all placing high hopes on her to do this and make us proud.”

They scored 344.34 in the women’s 10m platform synchronised diving event in Rio De Janeiro, fetching the silver for the event.

China won the gold with 354 points and Canada picked the bronze with 336.18 points.

Next week (August 18), she is scheduled to compete in the women’s individual 10m platform – a category for which she won bronze in the London Olympics four years ago.

The feat made her the first female Malaysian athlete to win an Olympic medal.

Four years ago, she was given a heroine’s welcome at Kuala Lumpur International Aiport upon her return from London, and she was honoured with RM300,000 reward from the prime minister on behalf of the federal government.

In Kuching, Pandelela was escorted from the airport by a convoy of bikers for the journey to the Astana where she was conferred the Johan Bintang Kenyalang (JBK) award by the Head of State.

This was followed by lunch with the then chief minister Tun Pehin Sri Abdul Taib Mahmud.

Later, the state government announced a cash reward of RM60,000 and a scholarship for her tertiary education.