Sunday, May 22
You are at:Home»Columns»Other Columns»Heritage at risk: our traditional foods 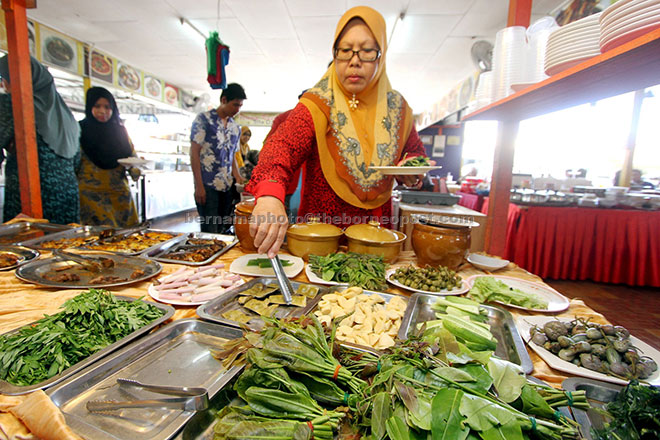 It takes everyone to treasure, manage and preserve local dishes so that our heritage lives on, before it’s too late. — Bernama photo

A QUICK glance around the office a few minutes before lunch hour shows people fidgeting in their seats, each eagerly waiting for someone (anyone really) to utter the magic words “Lunch anyone?”. Perhaps 30 years ago, the routine office lunch hour might have looked very similar and, at the same time, very different.

Instead of lining up in front of shophouse kopitiams in droves eager for a hearty serving of distinctly Malaysian fare, more and more young Malaysians are opting to patronise Western outlets, Japanese sushi bars, fusion restaurants and franchises. This phenomenon is mainly seen throughout large urban centres in Malaysia, Singapore and, to a certain extent, the region.

With young people able to afford more expensive fusion and foreign dishes, it’s indicative of a strong economy and increasingly globalised workforce. But on the flipside, it also puts our heritage dishes at risk.

Our traditional foods are at risk because there will be a succession crisis. Due to the Asean economic miracle in previous decades, young people have been able to scale the socioeconomic ladder and now strongly desire white collar professions.

Naturally, every generation wants to do better socially and economically compared to the previous. Therefore, it is very difficult to find youths who are interested in inheriting traditional food business operations.

Perception-wise, traditional food and beverage (F&B) operations are portrayed as undesirable due to several factors.

One of the main reasons is that the traditional food business model is seen as a ‘hard’ and ‘unfashionable’ industry that does not enjoy high social status.

Hawkers and cooks labour using their own hands and are seen as ‘blue collar’ even though they are highly skilled and in some instances commanding high incomes. Furthermore, the traditional food business lacks clear career progression.

Young people are ambitious and care deeply about their career paths; young people want to move up the career ladder and subsequently the socioeconomic hierarchy.

The traditional food business doesn’t provide these options to potentially-interested youths. The path to success, status and wealth for a traditional food entrepreneur is paved with uncertainties and risks.

Secondly, globalisation is slowly but surely changing our dietary preferences and palettes. High-end foreign dishes have a certain exotic allure and serve also as a status symbol of sorts, mostly for young people. People nowadays do not just visit restaurants to satiate hunger but instead crave an overall dining experience.

These restaurants serve fusion dishes or foreign fare that satisfy their (ever-more demanding) taste buds as well as enhance and compliment their lifestyles.

Globalisation and multiculturalism also position foreign food as being familiar and accessible. Having shawarma or sushi for dinner no longer requires trips to fine-dining establishments as they are now readily available to urban Malaysians. For example, sushi is sold on the cheap in large supermarkets and a regular sight in most mall food courts. Recipes for these foreign dishes are literally just a click away.

Now our local delicacies must compete with foreign foods, which are perceived as being more ‘modern’, ‘exotic’ and ‘of higher social status’, so therefore deemed better. Globalisation is creating a more interconnected world but at the cost of homogeny and commercialisation. Sadly, authentic traditional cultures around the world are vanishing. The influx of foreign (but often western) ideas and goods are overpowering local cultures, with food being one of the most affected.

We don’t have enough ownership and true pride in our heritage dishes. Few Malaysians actually understand the history, significance and origin of these traditional foods. There are few interested in developing food culture centred on traditional foods.

Culinary artists don’t spend as much time, resources and energy in developing traditional food culture as they do with fusion and contemporary (more often than not foreign) cuisine.

Even for restaurants which do focus on Malaysian traditional fare, the taste of the food has been changed and refined to suit a more demanding palate. These changes strike at the heart of our foods and undermine their authenticity. Nasi lemak costing RM20 surely tastes different from traditional RM2 nasi lemak. As for the average local food stall operator, profit is king. They turn to foreign labour to serve and prepare local foods due to both the difficulty faced in finding local successors and the pressure of raising profit margins.

Furthermore, businessmen who start franchise restaurants that serve traditional food often face quality control problems and the lack of culinary authenticity. More emphasis is put on supply-line optimisation and the bottom-line than respecting the sanctity of local delicacies.

To add insult to injury, those foreign workers who are good in preparing these foods will one day return to their home countries, bringing with them experience, skill and knowledge in Malaysian traditional culinary arts.

While on the other hand, customers lack respect for traditional dishes and regard them as only something to satisfy their hunger. When both businesses and customers ignore local food culture and continue to look down on traditional dishes, there is a real risk of traditional cuisine disappearing.

What great irony it would be for Malaysians to seek traditional food in foreign lands, one day in a future we dare not imagine.

Sarawak has an amazing culinary heritage that must be carefully preserved and managed. Traditional food operators in Sarawak are facing many of the same challenges, reflective of the industry as a whole. However, the situation in Sarawak might be different due to factors like lifestyle, smaller economy and creative marketing.

Firstly, the lifestyles of Sarawakians are different, life is slower as well as more family- and community-oriented. This leads to many people being satisfied with running small traditional food business operations as their goals were never to become the next chain but rather to earn enough to enjoy life.

Sarawak also has a smaller economy with less career opportunities, when compared to Peninsular Malaysia. Due to that, the food and beverage industry is a viable career path as it offers a stable income and business ownership. Last but not least, many young Sarawakians are able to find creative ways to market and sell traditional foods. For example, kampua noodles from Sibu are sold as instant noodles and since it’s a cottage industry, quality control and authenticity maintains the quality of the dish.

To give credit where it is due, the situation is similar to that of Peninsular Malaysia, where creative approaches are giving traditional foods a new lease of life, for example gula Melaka soft-serve ice cream. But in doing this, caution and discretion must be practiced to make sure the authenticity and spirit of heritage dishes are maintained with emphasis on the taste.

In conclusion, it takes everyone to treasure, manage and preserve local dishes so that our heritage lives on, before it’s too late.

Previous ArticleHow about a film about love unfulfilled or trust misplaced?
Next Article Building on the success in Paralympics