Tuesday, September 28
You are at:Home»News»Sarawak»Another accomplishment for Sarawak

Other guests look on as Taib officiates at the opening of Murum HEP. On fourth left is Adenan.

MURUM: The official opening of the Murum Hydroelectric Plant (HEP) in Belaga District, Kapit Division yesterday is a significant milestone for Sarawak.

The plant provides up to 944MW of sustainable, renewable and affordable energy for the state and additional power for the Sarawak Corridor of Renewable Energy (SCORE).

State cabinet ministers, elected federal and state representatives, government officials, community leaders and residents of the Murum Resettlement Area and other invited guests were present to witness the function which was held at the plant site.

In his speech, Taib said the Murum HEP marked a new hydro exploration drive towards more industrialisation which would attract more energy intensive industries to the state.

“At the moment, our potential is only half-exploited to attract more, especially power intensive industries.

“There is limitation to develop Sarawak unless we get more industries as we have limited size of population and limited resources,” he said.

In this regard, he called for greater cooperation in exploring new areas and harnessing human resources to develop more energy-based industries, which he described as the future of Sarawak’s economic growth.

“The Murum Dam has been the peak of our efforts. We can rely on our experience with the Murum to teach and help the people if there is the necessity for us to develop more hydro dams in future,” he added.

He thanked those affected by such projects for giving their cooperation for the overall and greater good of the state.

By doing so, he said they had given many job opportunities for more qualified Sarawakians.

Meanwhile, Adenan said hydropower is clean, cheap and safe; thus would be attractive to investors, which augurs well for greater growth of energy intensive industries in the state.

“From all the sources of energy we find that hydropower is the cleanest and the cheapest of energy,” he said, adding more than 50 per cent of power in the state is generated by hydropower. 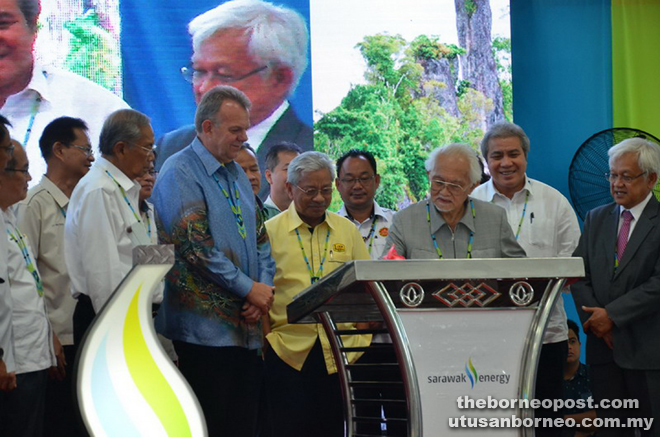 Taib signs the plaque to mark the official opening of the Murum HEP. 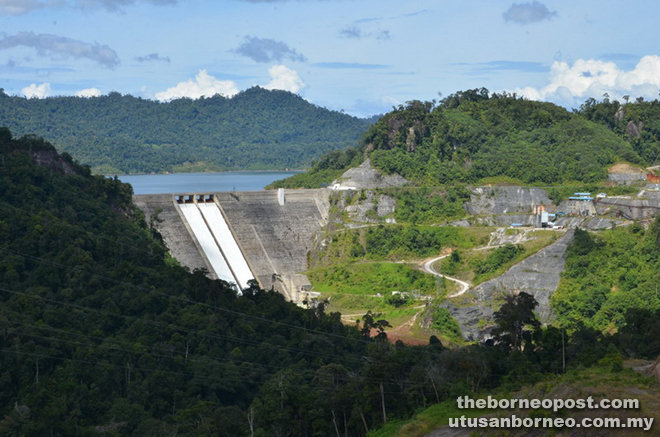 A beautiful view of the Murum HEP Dam from Batu Tungun platform. 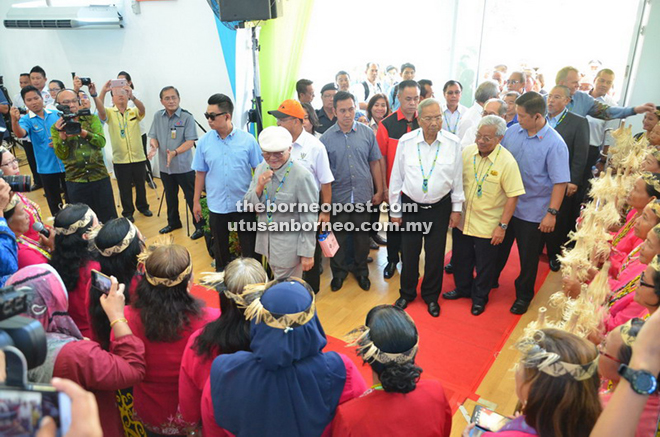 Taib and Adenan arrive at HEP hall for the opening of Murum HEP.

He said this was why the state had been emphasising on developing hydroelectricity projects.

“We have the Batang Ai, the Bakun and now the Murum Dam,” he stated.

He said it was Taib’s idea to harness the state’s rivers for their hydroelectricity potential.

Adenan also noted that alternative source of power must be sought for those living in the state’s interiors which were off-grid areas.

“While we take pride in producing cheap electricity, we must not forget them (those living in the interiors) who also need power.

“We must think of ways and methods to help them so that they will not continue to live in envy of the rest of us,” he pointed out, suggesting that SEB look into developing mini-hydro dams and solar energy alternatives for them.

Murum HEP is Sarawak Energy’s first hydropower development project under SCORE, and its second after Batang Ai HEP which was commissioned 30 years ago.

According to SEB, the Murum HEP “marks further success” in the state’s development strategy to become a high income society by 2030.

It took a team of 2,500 people to complete the RM4.1 billion mega structure. Impoundment of the reservoir started on September 21, 2013.

Designed to have a maximum power output of 944MW with an average annual energy output of 5,952GWh, the Murum HEP began its commercial operation in December 2014, and was fully commissioned in June this year.

Its timely completion contributed significantly to the state government’s decision to reduce electricity tariffs for domestic, commercial and industrial non-SCORE customers in Sarawak in 2015. Sarawak-based customers enjoy the lowest rates in Malaysia, which are among the lowest in the region.

The dam is innovative in its design with its steeped chute spillway the tallest in the world. It accommodates an Ecological Power Station with the main purpose of providing 24-hour supply to the resettlement areas and ensuring the ecosystem of the area immediately downstream of the dam remains active.

The demand for globally competitively priced bulk energy in Sarawak has been exceptionally strong, driven by SCORE customers located in the Samalaju Industrial Park and Mukah.

Murum HEP provides the power to meet almost a third of the SCORE generated demand with the remainder from the Bakun HEP and the upcoming Balingian Coal Fired Plant.

In the development of Murum HEP, Sarawak Energy was guided by international best practices – incorporating recommendations from the International Hydropower Association (IHA) Protocol and the International Commission on Large Dams (ICOLD) as well as local requirements set out under the Social Impact Assessment report and the Resettlement Action Plan.