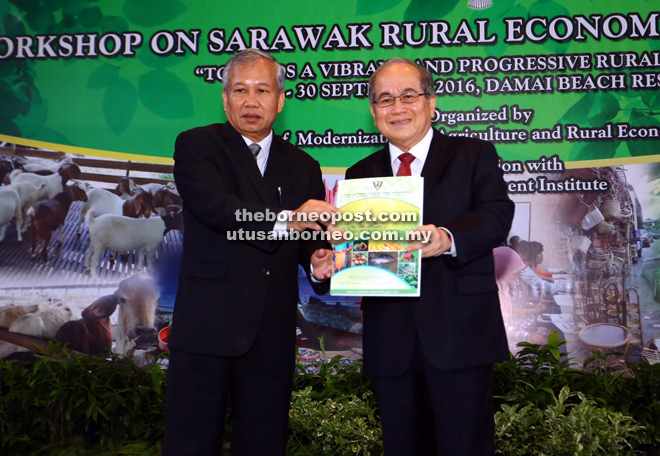 Ngenang (left) presenting a token of appreciation to Uggah.

KUCHING: The state government will intensify its efforts to transform the rural sector, not only raising rural income but also for more equitable development between rural and urban areas.

In stating this when officiating at the ‘Workshop on Sarawak’s Rural Economic Transformation’ at Damai Beach Resort here yesterday, Deputy Chief Minister Datuk Amar Douglas Uggah Embas said while working to reduce income disparity, the greater concern was the income gap between rural and urban areas.

Giving an example of the huge disparity between household incomes in urban and rural areas, he said in 2014, the mean household income for urban Sarawak was RM6,075 while the figure for rural households was only RM3,387.

He said this meant that the rate of poverty among urban households was 0.5 per cent while in rural areas it was 1.6 per cent – three times higher than urban areas.

“This means that the average rural household earns 44 per cent less than their urban counterpart. Both the income and poverty indicators point to rural areas being far more underdeveloped than urban areas, hence more needs to be done to bring economic development to rural areas.

“Therefore, this calls upon us to look at various models while examining the present one, present models that are functional will be continued, outdated models will be replaced or a totally new model which has been implemented in some countries will be introduced.

“We hope to bring it (model) over so that we can have comprehensive transformation of rural economy to realise the wish to make Sarawak a high-income state by 2030.”

Meanwhile, Uggah who is also Minister of Modernisation of Agriculture and Rural Economy, pointed out that after decades of being neglected, the task of closing the development gap was monumental.

“Since we are now playing a ‘catch-up’ game, our strategies, approaches and action plans need to be transformational in nature.”

He stressed that transformation can only take place if there is a change in mindset among players including policy markers, planners, implementers, business community and the target group.

“In this regard and especially during the early stages, the role of leadership at all levels to initiate, drive and sustain the transformation, the responsibility for leadership falls not only on the minister, but also assistant ministers, permanent secretaries, directors and divisional and sectional heads.

“As such, transformation also needs to be grounded in innovation and creativity, and so the key players need to be open-minded to new ideas from multiple sources. They need to look beyond the confines of their own experience, and they should have the ability to critically analyse and rationalise available options towards the achievement of set goals.”

Previous ArticleAdenan: Experts welcomed to annotate museum’s collections
Next Article Holding of elections not due to any single factor — PMO