Wednesday, July 6
You are at:Home»News»Sarawak»‘Conservation hapless without enforcement’ — Adenan 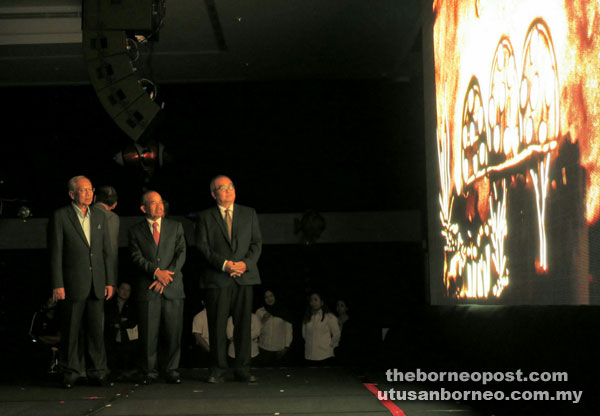 (From left) Adenan, Mohd Sidek and Yii watching the sand art performance which was stylishly signed off by Adenan to symbolise the launching of the Petronas-Sarawak Forestry Eco-Marine Conservation Project. 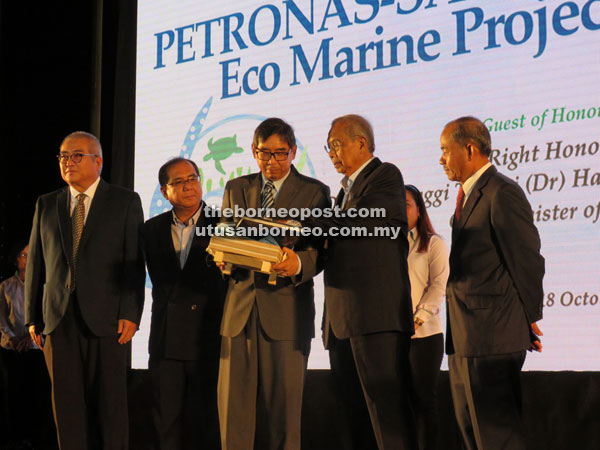 He was criticising the inaction by enforcement agencies on the many complaints of encroachment from local traditional fishermen.

“When complaints are made, excuses are made. The weakness is in the enforcement.

“Enforcement, not the law, is the deterrent. The law itself is not a deterrent as the best deterrent, according to David Marshal, is certainty of being caught. We must stop this as soon as possible – the sooner, the better,” he said in calling for action against encroaching foreign vessels.

He was speaking at the launch of the RM8 million Petronas-Sarawak Forestry Eco-Marine Conservation Project at Miri-Sibuti Coral Reefs National Park here yesterday.

The reef balls will deter illegal fishing trawlers from the national park because their dragnets will be destroyed if entangled with the artificial reef balls that have been planted around the coral reefs and act as underwater protection line to promote regeneration of coral reefs.

The Chief Minister further said the State was blessed with an abundance of marine resources but if the rampant encroachment by foreigners were left unchecked, marine life in its waters would be seriously depleted.

He suggested that Sarawak’s long coastline and the huge continental shelf which is as big as its land mass be better documented to facilitate effective protection and conservation of its ecology.

At the same time, he applauded this joint-effort by Petronas and Sarawak Forestry as timely and said it should be intensified.

“If we don’t do it now, the corals will be swept under the sea and with this, we want to help our local fisherman too, and apart from providing good breeding ground for fish, it will also prevent fishing trawlers from coming in to steal our fish.

“If we love Sarawak, we all should preserve our environment,” he said.

Miri-Sibuti Coral Reef National Park covers 186,930 hectares of water about 15 nautical miles from Miri shoreline and is the second largest marine park in Malaysia. It was gazetted on Feb 28, 2007 under the National Parks and Natural Reserves Ordinance 1998.

The project is to protect and regenerate dying coral reefs around the 12,200ha Sibuti Reef Complex within the 186,930ha Miri-Sibuti Coral Reefs National Park in northern Sarawak.