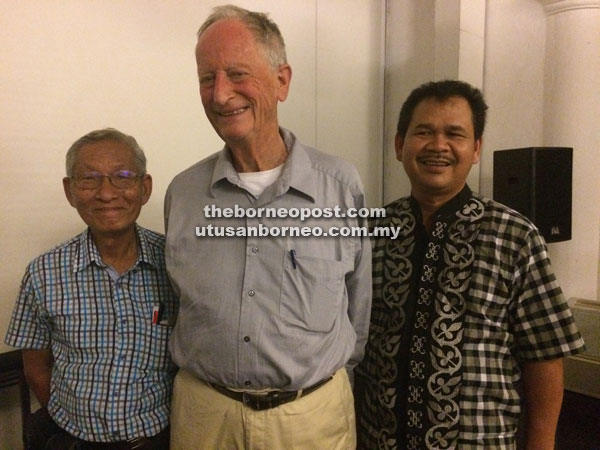 KUCHING: A crowd of around 80 people turned up for a public talk on a film about Ali, the field assistant of eminent 19th century British scientist Alfred Russel Wallace.

The talk at China House at the Old Court House on Tuesday night was presented by Earl of Cranbrook Dato Sri Dr Gathorne Gathorne-Hardy who is Sarawak Museum Department honorary curator of mammals.

He also showed behind-the-scenes shots of the documentary film which is being made by Indonesian film-makers, led by directors Jamie Curtis Hayward and June Thio.

“We made all these snippets which are sent to them. They are putting together a film about Ali in Bahasa Indonesia. What we put together are the pieces to be reassembled. There will be an Indonesian narrative.

“What you see here is not the film, but what is behind the scenes for the film,” he told reporters after conducting the talk. Cranbrook decided to contribute because he thought it was an interesting story that should be told.

“The Sarawak Museum Journal has my story about Wallace’s assistants. I just think it is an interesting story and that Ali’s role should be recognised.

“I have a lot of interest in Wallace. As a young man, I did a lot to follow Wallace’s footsteps. It was fun,” he said. He added that the film will be shown in Suffolk’s Aldeburgh Documentary Film Festival, which will be held at the beginning of next month.

‘Searching for Ali Wallace’ tells how Ali, who had no training as a scientist, accompanied Wallace for six years during his travels and studies in the Malay Archipelago, proving to be adept at collecting specimens. The talk was organised by Friends of the Sarawak Museum (FoSM) Society.