Sunday, May 22
You are at:Home»News»Sarawak»Pirates abscond with RM15m of palm oil 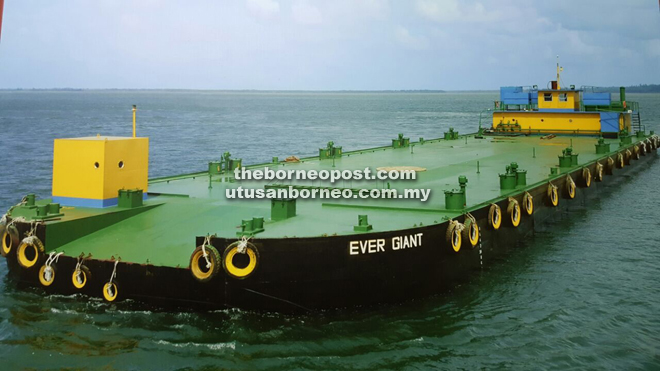 The tugboat (below) and barge which were robbed being escorted to Bintulu Port. 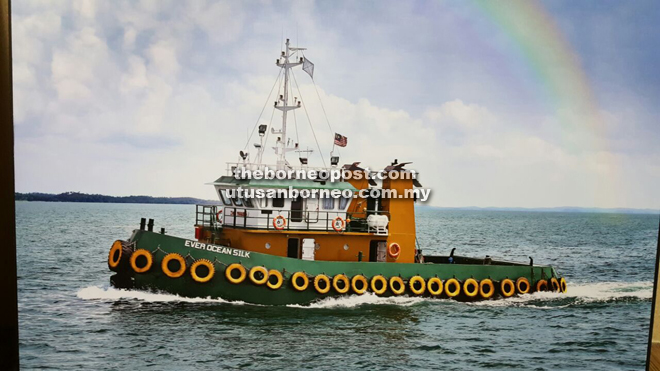 BINTULU: A tugboat (Ever Ocean Silk) and a barge (Ever Giant) carrying 2,499 metric tonnes of palm oil with an estimated worth of RM14.99 million were robbed at about 62 nautical miles from Bintulu Port on Tuesday night.

The armed robbers fled with all the palm oil, the tugboat’s communication system, and the crew’s personal belongings. They also transferred diesel from the tugboat and barge to their boats.

He said 10 of the tugboat’s Indonesian crew members were found safe onboard and no casualties were reported in the 8.30pm incident.

He further said the tugboat and barge were en route from Lahad Datu in Sabah to Port Klang when the incident happened. They left Lahat Datu on Oct 20 at 6.15am and were expected to arrive at Port Klang this Nov 1.

According to Aminuddin, the number of robbers, who were

armed with machetes, and their origins were yet to be determined.

tonight (yesterday) before we can proceed with our investigation, especially to get a clear picture of what actually happened,” he said.

The tugboat and barge were escorted by KM Tabah and KM Jepak to Bintulu Port.

“A forensic team has been formed to carry out investigations onboard the tugboat and the barge, while an investigation team will collect more information from the crew of the tugboat,” he said.

He said the investigation teams would be looking at different perspectives, especially on how the robbers knew the tugboat’s route and the exact time of its journey.

He said the robbers took the communication system of the tugboat and the personal belongings of the crew and transferred diesel to their boats.

The tugboat and the barge are owned by Pengangkutan Kekal Sdn Bhd, which is based in Kota Kinabalu, Sabah.

Aminuddin said MMEA Bintulu was informed by a representative of the transportation company after the owner they lost communication with the tugboat at around 9.20am yesterday.

“At the beginning we believed it was a kidnap incident. The owner of the vessel used satellite tracking system to trace the vessel.

“Three MMEA assets namely KM Tabah, KM Jepak and Penggalang 33 were despatched to trace the tugboat and the barge.

“KM Jepak later found the tugboat and barge at about 30 nautical miles off Tanjong Kidurong at 3.25pm where the crews were found safe,” he added.

He said MMEA was very concerned for safety in Malaysian waters and would intensify its patrol activities to prevent such incidents from recurring.

Pic: btu-bp261016-yy-robbery-p: Aminuddin points at the location where the tugboat and the barge were robbed by unknown robbers.

btu-bp261016-yy-robbery-p2&p3: The tugboat and barge which were robbed being escorted to Bintulu Port.