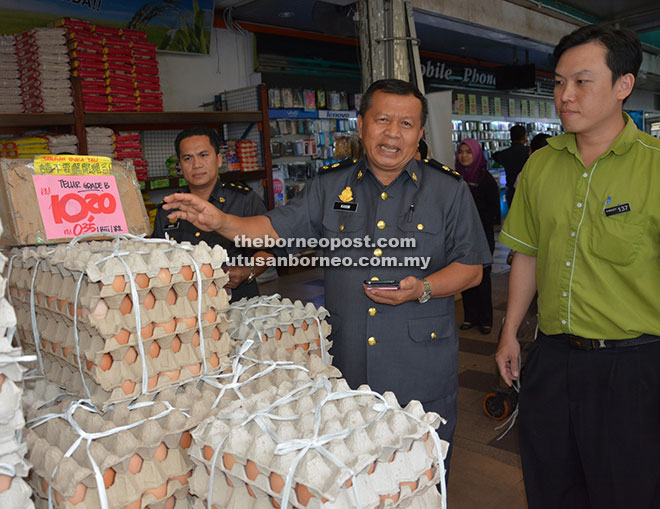 SIBU: Traders here are giving their full cooperation to the Deevapali Festive Price Control Scheme 2016 enforced from Oct 19, which ends on Nov 1.

Ministry of Domestic Trade, Cooperatives and Consumerism Sibu branch chief Kasim Mana said there had been no cases of non-compliance with the scheme so far.

“We are very happy with the level of cooperation extended to us by the traders in Sibu so far, and we urge them to continue extending such cooperation for a win-win situation,” he told The Borneo Post yesterday.

Kasim added their enforcement officers were regularly in the marketplace to monitor the situation.

A total of 18 items are gazetted under the Deevapali Festive Price Control Scheme 2016.

Under the scheme, individuals can be fined up to RM100,000 or sentenced to not more than three years’ jail or both or compounded RM50,000 for selling the gazetted items beyond the stipulated maximum prices.

On a related matter, Kasim warned of stern action against those caught profiteering from controlled items, especially hoarding cooking oil.

“Hoarding of cooking oil at any level — wholesalers, retailers or individuals — will be dealt with strictly.”

Meanwhile, Kasim said they had acted on 45 cases of flouting the Price Control and Anti-Profiteering Act 2011 for not displaying price tags since January this year, and confiscated goods worth RM5,080.71.

He also said they seized goods worth RM968,162.45 in four cases of non-compliance with the Control of Supplies Act 1961.

Kasim also disclosed that they had taken action on 42 cases of flouting the Weight and Measures Act 1972, and confiscated items worth RM8,460.00.

He said the cases were related to weighing scales not sent for stamping (recalibration) upon their expiry date.

“We have also taken stern action on 31 cases of infringing the Trade Descriptions Act 2011, namely for holding cheap sales (without permit), counterfeit goods and optical discs. We confiscated goods worth RM85,624.90.”

Those who are IT-savvy can email their complaints to e-aduan@kpdnkk.gov.my or sms to 15888 by typing “KPDNKK ADUAN <complaint details>”.