Wednesday, October 27
You are at:Home»News»Sabah»21 bodies agree to use ‘Momogun’ 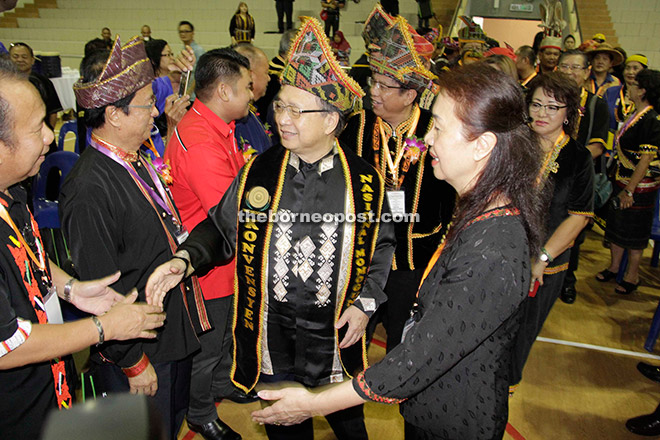 Dompok being greeted by delegates on his arrival at the convention venue.

KOTA KINABALU: Delegates from 21 KadazanDusun Murut ethnic associations and organisations at the Momogun National Congress (MNC) Convention yesterday signed a declaration agreeing to the use of ‘Momogun’ as a generic term for the Dusunic, Paitanic and Murutic ethnic groups in Sabah.

Most were of the opinion that being under one generic name would auger well for their members’ soci-economy and future.

MNC founder and honorary advisor Tan Sri Bernard Dompok who officiated at the convention said the term ‘Momogun’ could be proposed to the state and federal governments for use as a national identity of the Dusunic, Paitanic and Murutic ethnic groups in Sabah and to be used in official government forms.

This is because those in these ethnic groups have not been happy to be classified as ‘lain lain’ in official government forms and would like to see that their ethnic groups be listed in the forms.

Dompok said USDA, KSS and KDCA were right to want to see Dusun, Kadazan and KadazanDusun used as the term for their respective ethnic groups, but pointed out that there were also groups which did not want to be classified in these groups.

“I am a Kadazan but for those who are not of the same ethnicity as me, they have a choice as to what they want to classify their community as.

“What we can do is to come up with a generic term like what the Iban, Bidayuh and Orang Ulu in Sarawak have done and they are all known as ‘Dayak’.

“The term ‘momogun’ was not created by MNC; it has been used by our ancestors and I feel that if ‘momogun’ is used, the Dusunic, Paitanic and Murutic communities do not need to fear losing their identities as names like Kadazan, Dusun, Rungus, Murut, Lundayeh/Lundayuh, Tatana, Tobilung, Lotud, Liwan, Tindal, Sungai, Tombonuo, Bisaya, Orang Sungai/Sungoi and Begak among others will be maintained.

Dompok also reminded the delegates to discuss the issue in a peaceful manner and to choose their words wisely so as not to hurt anyone’s feelings.

“As we all know, the Momogun is rich in beautiful words and are known for their politeness and courtesy. Let us maintain this highly praised culture of ours at all times including during discussions involving various ethnicities,” he said.

He added: “I do follow the many interesting exchanges in chatrooms on the issue on Momogun as a generic term.

‘There are a lot of very passionate postings and I think it would be a disservice to the efforts and the passion of those who participated if any one were to pour cold water on what have been expressed.

“However, I do think that there is room for prudence in the choice of language and the intensity exerted in the pursuit of a point. ‘Killer phrases’ can best be avoided.       “Articulation is an art. A proponent of a particular position can make the case go further or stall it entirely. In other words the messenger must not kill the message,” he stressed.

Previous ArticleIGP: Police to call 3 former ministers
Next Article Budget 2017 easing the burdens of B40, M40