Sunday, May 22
You are at:Home»News»Sarawak»Buso to be a heritage town 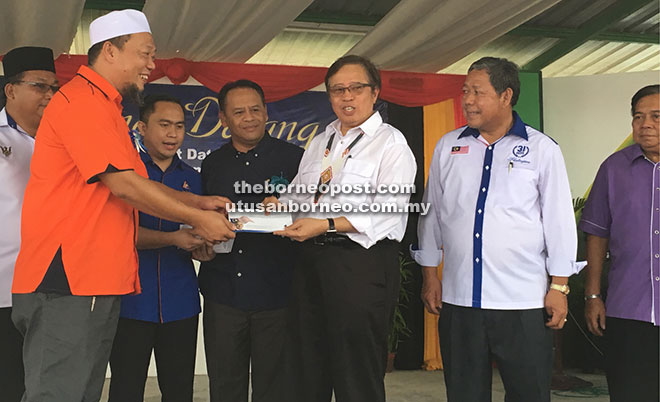 Abang Johari (second right) presents a flood relief aid to a Buso local. Looking on from right are Nogeh and Henry.

BAU: The state government will honour election pledges made to the century-old Buso bazaar and surrounding villages; this includes a new bridge, a resettlement area, and turning it into a tourism attraction.

Deputy Chief Minister Datuk Amar Abang Johari Tun Openg said these were part of the Bau transformation masterplan to improve the socio-economy of the people.

He announced the approval of a RM10.7 million concrete bridge across Sungai Sarawak Kanan to link Buso bazaar to Batu Kawa-Simpang Sibuluh road in order to reduce dependency on the old Bau Road. The bridge is expected to be built within the next three years.

He also mentioned that Buso bazaar would be made the second heritage town in Bau district, after Siniawan bazaar. Under this initiative, the century-old shophouses would be preserved and its historical significance to Sarawak would be promoted to attract visitors from other districts and abroad.

He assured the folk that a site would be identified for a new resettlement area so that they would no longer have to suffer from floods.

“During the state election, pledges were made when we campaigned for (now Tasik Biru assemblyman) Dato Henry Harry Jinep. Now that he has gotten the popular support of the people, we will implement what we had pledged.

“If we do not do it, we will be called ‘pembulak’ (not honest). Our Chief Minister Tok Nan (Datuk Patinggi Tan Sri Adenan Satem) does not want ministers and elected representatives who are not honest,” he said during a meet-the-people session at Buso near here yesterday.

Abang Johari, who is also Minister of Housing and Urbanisation and Minister of Tourism, Arts and Culture, had earlier boarded a boat from Seberang Buso to Buso to visit the proposed site for the bridge. He then did a walkabout to the bazaar and primary school.

Abang Johari said he was accompanied by strategic senior officers from the government, including three permanent secretaries from the Ministry of Housing and Urbanisation, Ministry of Tourism, Arts and Culture and Ministry of Local Government, as well as directors of Land and Survey Department and Public Works Department, for the visit to Buso to better understand the situation and needs of the people.

To ensure smooth implementation of the pledges, he said a committee comprising representatives from the relevant ministries and departments would be set up.

On the new bridge, he said construction would begin after planning and road alignment were done.

The construction of Buso bridge and another RM10 million bridge connecting Tondong and Sebuku would be funded under the RM0.5 billion rural development budget allocated by the chief minister, he added.

On the resettlement area, he said the Land and Survey Department and Land Custody and Development Authority (LCDA) would identity a higher ground as the site, and he, on his part, would try to get a big allocation to realise the project.

He also said the Museum Department, which is under his ministry, would gazette the shophouses in Buso as heritage buildings, which means any repairs or upgrading works must have approval from the department.

“Buso will be redeveloped so that this place becomes more orderly. With the new bridge, Buso can be accessed from Batu Kawa road instead of only through the old Bau Road.

“I would like to make Buso a heritage town, like what I did for Siniawan, which is now popular among tourists from China. Both Buso and Siniawan have historical significance, including becoming the place of refuge during World War II,” he said, adding Buso could be part of the corridor of tourism, which starts from Bau to Lundu, Sematan, Rambungan and Bako.

He also announced RM200,000 for the Darul Ehsan Mosque in Buso, which he declared open some 22 years ago, for upgrading and repair works.

He praised the folk in Buso, comprising Malays, Chinese and Bidayuhs, for living harmoniously with one another for many generations.

Henry, in his speech, welcomed the initiatives to develop Buso and other areas in Bau. He said they would transform the district into one that is thriving with activities.

Nogeh praised Abang Johari for making the effort to go on a walkabout in Buso together with senior government officers to better understand the situation on the ground. During the function, 81 families received flood relief aid.