Sunday, September 26
You are at:Home»News»Sarawak»RTM is still relevant — Karim 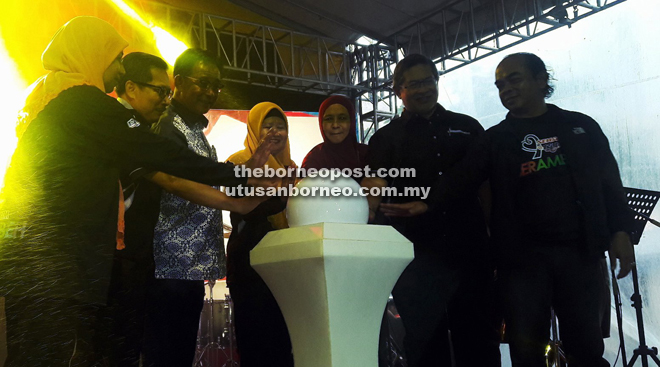 Karim (third left) and Salmah (fourth right) together with RTM senior officers place their palms on the globe in a symbolic gesture to declare open the Sehati @RTM Berambeh.

KUCHING: Radio Television Malaysia (RTM) is still relevant and plays an important role in disseminating accurate information, news and provides entertainment via television and radio for the general public.

Assistant minister for Youth and Sports Datuk Abdul Karim Rahman Hamzah commended RTM Sarawak for fulfilling its duty and responsibility to meet the different needs of the multiracial community since its establishment.

“We are all very familiar with RTM as many generations have grown with the station. The station has provided many programmes in different languages to reach out to its viewers and listeners,” he said whern officiating at the Sehati @RTM Berambeh programme held at the RTM compound yesterday.

“Such is the identity of this organisation that’s sensitive towards the needs of the people in Sarawak’s diverse community,” he added.

On the four-day Berambeh programme that started on Nov 3 featuring many activities and events from sports, leisure to entertainment, Karim said he was amazed by the high spirit of RTM staffs in bringing and uniting the community and RTM together.

“The efforts put in are huge despite the small number of staffs. There are varieties of activity that suit the entire family. So congratulation for such a successful event,” he added.

Earlier, RTM Sarawak director Salmah Ibrahim Melina pointed out that the main objective of the Berambeh event was to reach out to the general public and bring them closer to RTM.

“It is a way to show our appreciation to the listeners and viewers and we hope to strengthen our ties and renew our bond with the people and staffs through various activities to be held until Sunday,” she said.

“We want to play our role in helping to strengthen the family institution as well,” she added.

Salmah added that the event was also to raise funds for RTM Recreation Club so that its members could participate in the Sukan RTM SeMalaysia to be held in Kelantan next year.

At the function, Karim announced a RM20,000 grant to aid them in preparing for the games.

There are 85 stalls set up around the compound offering various products like corporate clothing, shirts and shawls, souvenirs as well as traditional massage.

Visitors also stand a chance to win mysterious and attractive prizes including motorbike, hotel-stay vouchers as well as electrical and electronic items in the lucky draw.