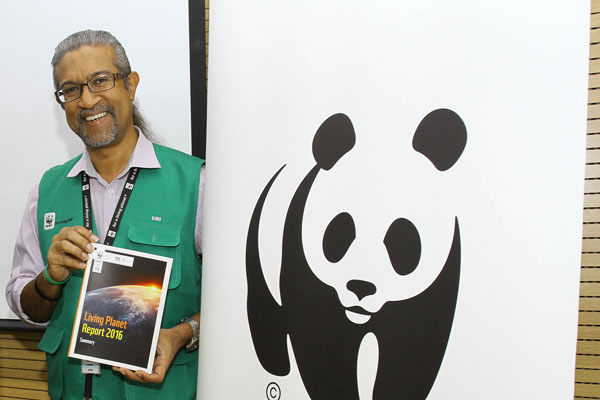 According to the LPR, global wildlife could plunge to a 67 per cent level of decline in just the 50-year period ending this decade as a result of human activities.

“While the global tiger population has slightly increased to 3,900, the Malayan tiger population estimate has declined to as low as 250. On June 23, 2015, it was moved from the Endangered to Critically Endangered species in the IUCN Red List of Threatened Species,” said WWF-Malaysia executive director and CEO Datuk Dr Dionysius SK Sharma.

IUCN stands for International Union for Conservation of Nature.

“Our national icon, the Malayan tiger, has been pushed to the brink of extinction by poaching, habitat loss, forest degradation and fragmentation. We need to combine our efforts at full force to double the number of tigers in the wild. By conserving tigers in their natural habitat, we are actually saving the entire ecosystem where the tigers live which is crucial for our own survival.”

He said the Bornean Orangutan was listed as critically endangered by IUCN four months ago.

According to the IUCN Red List, Bornean Orangutans decreased by more than 60 per cent between 1950 and 2010, and a further 22 per cent decline is projected to occur between 2010 and 2025.

Given that a Bornean Orangutan’s generation length is 25 years, this decline will occur in a period of three generations.

“We really need to take urgent action to save the species,” said Sharma.

“WWF-Malaysia worked closely with the Sabah Forestry Department to restore degraded orangutan habitats such as the totally protected Bukit Piton Forest Reserve, which was gazetted in 2012 based on WWF-Malaysia’s orangutan research and advocacy,” he said.

For the Sumatran Rhinoceros, the Sabah government declared it extinct in the wild (for Sabah) last year.

Currently, there are three captive rhinos at the Borneo Rhino Sanctuary (two females and one male).

WWF-Malaysia also worked with the Department of Fisheries to protect two of four species of marine turtles in the country.

“Positive developments have been observed at several nesting beaches across Malaysia. In Terengganu, more Green turtle eggs are secured for incubation with intensified patrolling during the annual nesting season, with more than 40 per cent increase in nestings recorded in the last 25 years. In Semporna, Sabah, 78 Green turtle nests and 26 Hawksbill turtle nests are recorded and secured for incubation in 2016,” said Sharma.

The overall nesting population of Hawksbill turtles recorded from 2006 to 2015 in Melaka appeared to be stabilised with approximately 400 nestings yearly.

However, based on data recorded for Pulau Upeh, the turtle island of Melaka, the population has declined by 70 per cent in the last 10 years.

Loss of habitat due to rapid coastal development continues to threaten the future of this species.  Melaka is home to the second largest population of the species in Malaysia.

Sharma commended the dedicated rangers from the local communities for patrolling nesting beaches.

However, the Malaysian Leatherback population, one of the most iconic turtles in the world, has plummeted from over 10,000 nestings in the 1950s to near zero in recent years.

The Olive Ridley turtle population in Malaysia has similarly recorded a drop of 99.9 per cent.

WWF-Malaysia continues to advocate for a nationwide turtle egg trade and consumption ban, habitat protection and intensification of enforcement to prevent poaching of turtles in their marine habitat.

Malaysia is ranked as the world’s ninth largest producer of shark products and third largest importer in volume terms, according to the Food and Agriculture Organisation of the United Nations, State of the Global Market for Shark Products report, 2015.

Saving sharks is crucial as 84 per cent of these imported shark fins are consumed domestically.

In January 2016, WWF-Malaysia embarked on the year-long ‘My Fin My Life Campaign’ to raise awareness for shark conservation.