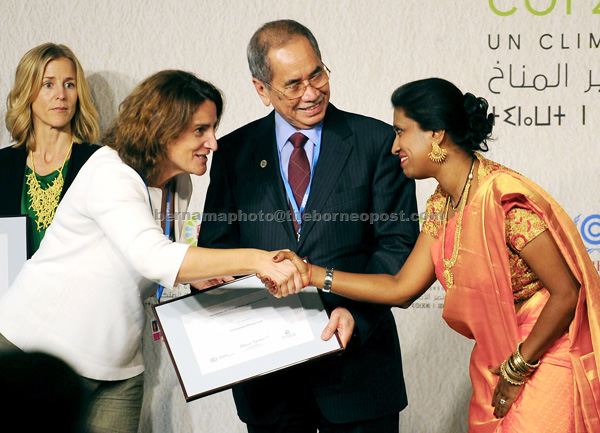 Advisory Board of the Momentum For UNFCCC chairperson Teresa Ribera Rodriguez (left) presents Connected Mangroves award certificate to Supriya Prasannan, one of the participants, as Wan Junaidi looks on. — Bernama photo

MARRAKECH: Malaysia has reaffirmed its commitment to sustainable forest conservation and management at the ongoing United Nations conference on climate change here attended by heads of state and government and ministers in charge of environment from over 190 countries.

“One of our core strengths is in the area of forest and sustainable forest management. Our forest management records date back to 1905, including the Matang Mangrove Forest Reserve (in Sarawak). Today this site has been acknowledged as one of the best-managed mangrove forests in the world,” he said.

Malaysia’s forest cover now stands at 54.5 per cent and at least 50 per cent of the total land area will be maintained as forest and tree cover.

Wan Junaidi, who leads the Malaysian delegation to the conference, said the country was also committed to the reduction of emissions from deforestation and forest degradation as well as promoting the role of conservation, sustainable management of forests and enhancement of forest carbon stocks in developing countries, otherwise known as REDD+.

For this, Malaysia presented the latest REDD+ outcome report to the United Nations Framework Convention on Climate Change (UNFCCC) Secretariat and hosted the REDD+ Day on Monday here.

“Malaysia has an ambitious REDD+ Strategy to address the holistic forest management requirement and looks forward to accessing the international finance and support required for its successful implementation,” he said.

He said extreme weather events were already taking a toll on the sustainable development gains achieved by Malaysia.

Wan Junaidi told the conference that Malaysia experienced one of its worst floods in 2014 that devastated entire settlements in several states with losses estimated at US$250 million and affected two million people.

“Malaysia remains concerned about the impact of climate change in agriculture and food security. Malaysia believes in maintaining a balance between natural area conservation, food security and sustainable development,” he said.

To underscore Malaysia’s commitment in realising the UN’s targets on reducing greenhouse gas emissions to tackle global warming under the Paris Agreement signed by all countries last year, it has completed domestic arrangements to send the country’s instrument of ratification of the agreement to UN headquarters in New York.

Once again, Wan Junaidi reminded developed countries of their continued responsibility to provide clear leadership in reducing their domestic greenhouse gas emissions especially in the pre-2020 era so as to build confidence and set the stage for the much-needed ramping up of action in facing the threat of climate change. — Bernama