Friday, September 30
You are at:Home»News»Sarawak»Bintulu boy Pau on cloud nine atop MLNG 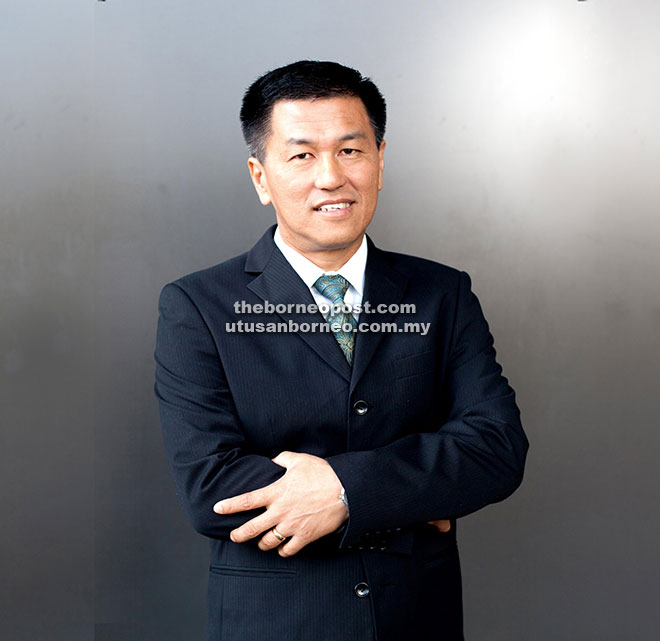 KUCHING: A Bintulu boy has been leading Malaysia LNG Group of Companies (MLNG) since last April.

For Pau Kiew Huai, pushing an ageing plant to produce a world-class performance is a massive challenge for Petronas subsidiary MLNG, which manages and operates the Petronas LNG Complex (PLC).

But sustaining the company’s financial performance under the duress of a prolonged oil and LNG price slump is something Pau Kiew Huai and his 1,500-strong team must deliver.

When Pau was appointed to the post, the global oil price was below USD30 per barrel. Hence, it was an appointment very few people would envy.

But Pau viewed the challenges as opportunities to prove that the impossible is possible.

His experience as an engineer at MLNG will come in handy. It taught him to be self reliant, disciplined and committed.

“Those days, MLNG does not hire contractors to do engineering work at the plant. We have to be hands-on. For instance, we have to draw and fabricate parts when valves broke down. We have to do everything ourselves: we have to multi-task,” said Pau in an email interview.

The hunger for every single molecule of LNG produced in Bintulu from buyers in the Far East also means the MLNG plant will need to perform at an optimum level to fulfil the company’s contractual commitments to deliver cargoes to power companies in Japan and later to South Korea and Taiwan.

“We cannot afford to have any glitch. The plant’s reliability must be 100 per cent. To be able to achieve this performance level, we must strictly adhere to very stringent rules, be totally dedicated and committed,” he said.

“For example, when a secondary pump breaks down, we have to work round-the-clock to fix it. There is no two way about it—our main focus is to make sure the plant is up and running safety at optimum level.” 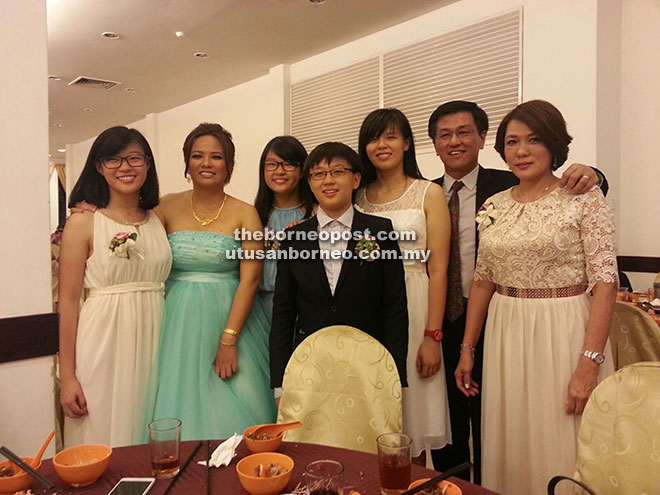 Pau with his family.

Pau held various positions at MLNG, including as an area engineer for Utilities, project engineer, engineering manager for MLNG Rejuvenation Project, and head of MLNG Dua Debottlenecking Project before he was transferred to Petronas Research and Technology Division in Kuala Lumpur in 2006 and promoted to general manager.

Four years later, he received another promotion, as head of Group Technical Solutions.

In 2015, he returned to Bintulu to become the head of Plant Division at MLNG.

So far, what he did with MLNG during his second stint has been impressive. Under his guidance, both as head of Plant Division and head of LNG Malaysia, the company was able to cushion the impact of the prolonged low-price environment, which started in mid-2014.

The company is on track to achieve its record-breaking production target of 29.8 million tonnes per annum (MTPA) of LNG this year.

Pau was born in Sibu on July 29, 1962. He was barely two-month-old when his parents took him to Bintulu. The family travelled on a coastal vessel and endured a long and treacherous journey along the coast of central Sarawak. The family initially settled in Sebauh, which was an early settlement along the Kemena River, some 30km from Bintulu town. After a few years at Sebauh, they moved to a rubber estate along Jalan Miri-Bintulu (now known as Jalan Tun Hussein Onn) in the late 1960s.

“I was born in Sibu, but my father didn’t manage to register my birth until we came to Bintulu. So, I was registered in Bintulu almost two months after my actual birthday,” he said.

“The only means to go to Bintulu from Sebauh at that time was by boat. The journey took about five hours one way. When we moved to Bintulu, the place was still very backward. There was only one taxi, which was actually a Land Rover.”

The young Pau spent most of his childhood at the rubber estate, where his parents worked as rubber tappers and later ventured into rubber production business. When he was six years old, his father sent him to Sibiew Primary school. He studied there from 1968 to 1974. The school still stand today, he said.

He continued his studies at Bintulu Secondary school (now known as SMK Bintulu) up to Form 5 before furthering his studies in Miri.

He was in Miri for only a few months before his father sent him for A-level studies in England. He later pursued his mechanical engineering degree at Nottingham University.

“In my batch, there were only 18 of us who passed the O-Level exam. There was no Form 6 class at all secondary schools in Bintulu then. So, we had to go to Tanjong Lobang School in Miri to study Form 6.”

But by the time he left Bintulu to further his studies, the young Pau already knew what he wanted to do in life.

He was 15 years old when Petronas partnered Shell BV and Mitsubishi to build Malaysia’s first LNG project—the MLNG project—at Tanjung Kidurong, Bintulu. At that time, it was the most ambitious and costly industrial undertaking ever done in the country.

The project became a reality more than a decade after a substantial natural gas reserves was discovered in Sarawak’s Central Luconia basin in the 1960s. With the rising global demand for a cleaner source of energy, Malaysia made the project economically feasible for Petronas and its partners to
pursue.

“As a young boy growing up in Bintulu during the period of the oil & gas boom, I always wondered what it would be like to work in the oil and gas industry.”

The hustle and bustle that happened in Bintulu due to the development of Sarawak’s gas resources offshore of Bintulu inspired him to pursue a career in the oil & gas sector.

“I wanted so much to work with MLNG and that was why I studied engineering at university.”

When he returned to Malaysia in 1985, the oil & gas industry was still reeling from the effect of the prolonged global recession, which resulted in the 1985-86 economic crises in Malaysia. Unemployment rate in Malaysia was among the highest in the region at that time.

The young Pau had to settle for less as he believed in the maxim ‘Beggars can’t be choosers.’

Pau was somewhat fortunate to land a job at a local property developer—Sasa Industries. When he came on board, the company was in the midst of changing its business direction because the property market was badly hit by the recession.

“The properly market has hit rock bottom, so Sasa Industries had to change its course. We ventured into oil and gas business, instead,” Pau recalled. The company managed to win some contracts from MLNG to do blasting and painting works. 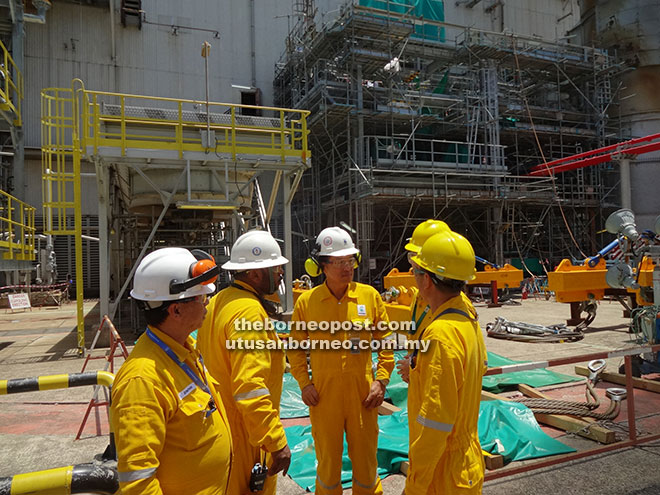 Pau (second from right) being briefed by MLNG engineers during a walk about at the MLNG plant.

Despite the low pay, Pau persevered with Sasa Industries while patiently waiting for the opportunity to join MLNG.

Three years later, he got his breakthrough.

“I still remember how excited I was when I got an interview with MLNG. I had the privilege to be interviewed by MLNG’s first plant manager—the legendary Roger Perez himself. He was quite a character.”

Now aged 54, this local boy who grew up in the gas town in the early 60s and 70s when it was still covered by jungles and rubber plantations is finally living his dream to serve at the highest management level in Malaysia LNG.

“To work here in MLNG is truly a dream come true for me.”

One MLNG staff has this to say about Pau: “His work as head of LNG Malaysia is cut out for him. He came with a reputation of being technically strong and holds an excellent leadership track record.”

The PLC sits at the tip of Tanjung Kidurong, Bintulu, facing the South China Sea, and is home to two of the oldest liquefied natural gas plants in the world. Malaysia’s first LNG plant—the Malaysia LNG Satu— was completed in 1982 and the second plant—MLNG Dua—in 1992.

Occupying an area of about 300 hectares and stretching more than seven kilometres in length, the PLC is as big as Bintulu town. It used to be the largest LNG plant in the world, until Qatar built a bigger one and officially assumed the world’s biggest LNG plant in 2009.

The PLC is also Malaysia’s strategic asset that must be protected at all cost, including ‘24/7’ surveillance by the Malaysian National Security Council. The plant was gazetted as ‘restricted fly zone’ in 1995, where aircrafts are not permitted to fly below 2,500 feet above sea level.

With a total LNG production capacity of 29.8 million tonnes per annum, the PLC is set to sustain its position as the second largest contributor to Petronas revenue this year. Last year it contributed 22 per cent, and in 2014, 23 per cent to Petronas income. The value of LNG exported from Bintulu constituted about five per cent of the national GDP and about 50 per cent of Sarawak’s gross domestic export.

The facility is clearly a jewel in Petronas crown and one of the most valuable economic assets of Malaysia. It’s operational and financial performance is crucial to the survival of the Malaysia’s only Fortune 500 company, which contributes about 25 per cent to the national income.

The PLC’s ability to maintain a world class performance is also crucial for Petronas to defend its position as a global LNG player, with equity production of 40 million tonnes a year by 2020.