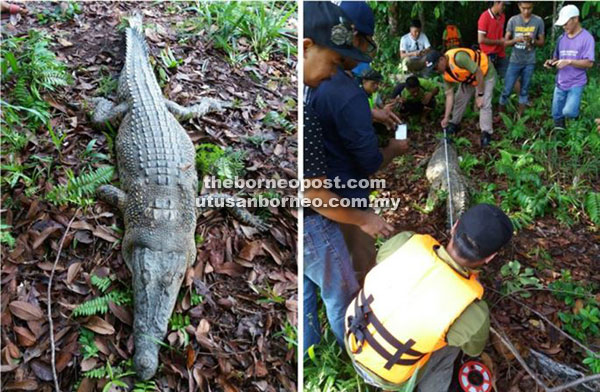 SFC in a statement yesterday said SWAT members from SFC headquarters assisted by Sibu Regional Office personnel were dispatched to Kampung Bakong, Oya earlier last week to hunt down the crocodile which attacked and killed Sili [email protected], 60, on Nov 11.

“The team commenced culling operations on Nov 18, 13 baited hooks were placed at locations along the river where Sili was attacked. A male crocodile weighing about 200 kg was hooked just 100 metres from the site where the victim was attacked,” an SFC spokesperson said.

The statement also noted that the operation covered a 5km radius area from the site of the attack.

“With the successful culling of the adult crocodile deemed capable of the attack, the operation at Sungai Oya was called off yesterday (Sunday).”

SFC also took the opportunity to extend its gratitude to all parties involved particularly the police and villagers for assistance rendered during the operation.

The spokesperson also reminded the public to be vigilant at all times when using the river.