Sunday, September 25
You are at:Home»News»Sarawak»MRT network map not from my ministry — Abg Johari 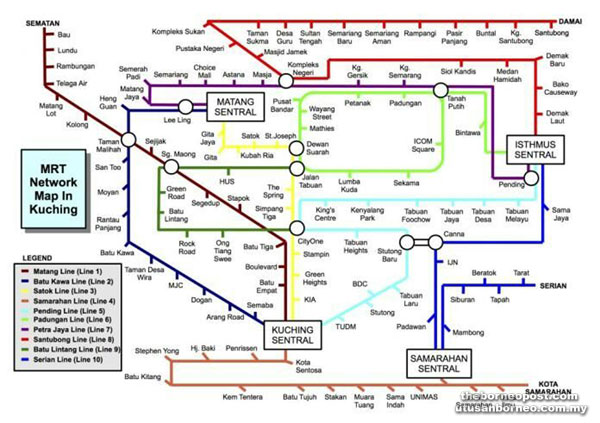 KUCHING: Deputy Chief Minister Datuk Amar Abang Johari Tun Openg, who is also Housing and Urbanisation Minister, has denied the claim that there is a Mass Rapid Transit (MRT) network map for Kuching, which has been going viral on social media.

He insisted that the MRT layout plan is not from his ministry.

The authentic-looking ‘MRT Network Map in Kuching’ depicts 10 MRT lines interlinking the city centre with areas such as Pantai Damai, Sematan and Kota Samarahan as well as many other destinations in between, via what appears to be four major hubs – Kuching Sentral, Matang Sentral, Isthmus Sentral and Samarahan Sentral.

A local Bahasa Malaysia online portal had, rather conveniently, used the map to accompany its news entitled ‘Sarawak to have Light Rapid Transit (LRT) and MRT lines — Abang Johari’.

The online report could have been derived from the impromptu interview conducted upon Abang Johari at the State Legislative Assembly on Monday, when the minister was about to leave for the lunch break.

The news had quoted Abang Johari as saying that Sarawak was set to come up with LRT or MRT system to enhance the present public transportation.

The portal further cited Abang Johari as having mentioned that the LRT-MRT proposal was among the components of the State Urban Renewal Master Plan slated for next year.

In the interview, the minister did say that public transportation would be included under the master plan.

However when pressed by reporters if the proposed MRT would be among those included under the master plan, Abang Johari did not respond directly to the question apart from stressing repeatedly that studies had to be conducted before any decision could be made.

In a statement to The Borneo Post yesterday on the matter, Abang Johari underlined: “I said options were the Bus Rapid Transit (BRT) system, LRT and MRT. This has to be studied further.”

He also wanted The Borneo Post to provide clarification on the matter, stressing that he did not want to be misquoted.

“(There’s) a lot of spinning on social media,” said Abang Johari, who is also Tourism, Arts and Culture Minister.