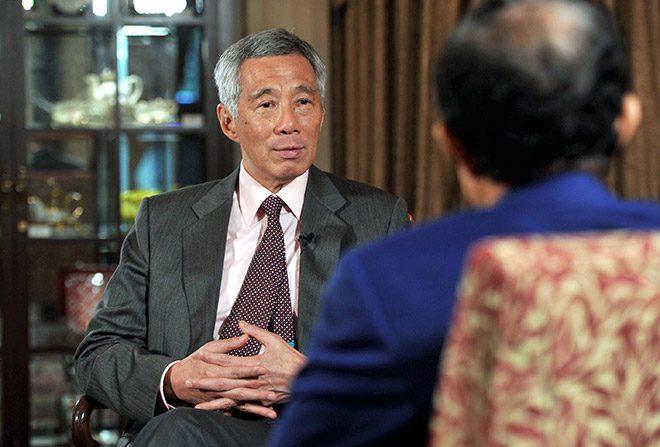 Lee during his interview with Bernama on Monday. — Bernama photo

SINGAPORE: Singapore Prime Minister Lee Hsien Loong hopes to sign the bilateral agreement on the development of the high-speed rail (HSR) between the republic and Malaysia in the next leaders’ retreat.

Both countries have been discussing the agreement for more than a year now, since several retreats ago.

“We have made very good progress. We are almost there, and I hope that when I meet Prime Minister Najib (Najib Tun Razak) at the next retreat, we will be able to sign the agreement,” Lee said in an interview with Bernama on Monday.

In terms of scale, Lee described the HSR as “very ambitious, very complicated and a very expansive” project.

“We have to try our best to anticipate what the likely issues are, when we build it, when we operate it, and have a clear understanding on how we will deal with it if a situation arises.

“The first thing is to have a sound agreement between the two countries on the basis of how the project is structured, how it is going to be executed, and how it is backed by the two governments.

“That is the first requirement, that we have a very good agreement which sets out clearly a sound basis to build and operate the system,” he said.

Lee who had previously said that “good execution will be crucial” for the HSR, was asked on what were the pitfalls, among other things, that should be avoided for the massive long-term investment.

He noted that equally the project’s execution would be very important – in designing it, in calling for tenders, and evaluating the proposals as several HSR systems in the world had been lobbying very hard to get this contract.

Among them are the Japanese, Koreans, and the Chinese HSR systems.

“Each has its strength, and we will have a very difficult decision evaluating the bidders who come along, and deciding which one is the best overall,” he explained.

Asked on cost-sharing of the mammoth project, Lee said: “All those have to be clearly specified.

“That is one of the things which makes this project complicated because there are two governments involved.

It is like the project from London to Paris, the Channel Tunnel.

“When you have two authorities involved, you have to decide how to partition, where the line is drawn.

“I build my part, you build your part, and we have to meet at the same point.

“If it does not meet, then we will have a big problem,” he said.

Nonetheless, the Singapore Prime Minister was very optimistic as he said: “It is complicated but there is a will.

And there is a good will, and we would likely make it succeed.” In Tokyo recently, Najib had said that Malaysia and Singapore were on track to sign an agreement on the HSR project by early next month.

Najib said the international tender to supply the HSR trains could be called by the fourth quarter of next year.

He said most issues relating to the project had been ‘more or less’ resolved. — Bernama