Sunday, November 28
You are at:Home»News»Sarawak»Lawyers to earn credit hours before renewing PC 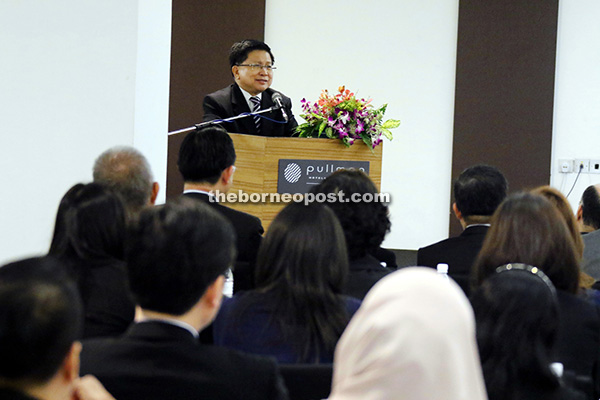 KUCHING: Local lawyers may have to earn credit hours from various advocacy seminars to get their practising certificate (PC) renewed.

Chief Judge of the High Court of Sabah and Sarawak Tan Sri Richard Malanjum said he hoped to make the ruling compulsory by 2018.

He said he would have to deliberate the matter with both the Attorney Generals (AGs) of Sabah and Sarawak as well as the Sabah Law Association and Advocates’ Association of Sarawak before arriving at a final decision.

“It is still in discussion stage. I need to speak to the state AGs first and the associations. After that we will formulate the rules. Maybe 2018, we can refine it.

“It is good for lawyers to have courses. If they don’t attend a certain amount of hours in a year, then they won’t get the renewal. So it is good for the profession. But let me speak to the relevant stakeholders,” he said when met by journalists after opening the third advocacy skills seminar held at a hotel here yesterday.

Richard assured that he would make the decision based on a consensus.

“We will discuss and come up with a consensus. We’ve been talking about it quite a while, but there are pros and cons. I know in Australia, they want that to be done.”

Asked if similar policy had been implemented in Peninsular Malaysia, he said: “I don’t know. I’m not sure about that.”

He pointed out that the proposed move would help practitioners in the industry to improve their standard.

He was also confident that practising lawyers would agree to introduce and implement the proposal.

Some 100 legal practitioners attending the course. — Photo by Jeffery Mostapa

‘Some legal practitioners never bother about the facts of the case’

“Hopefully (the implementation) by 2018 because it takes time to get things done. I don’t think (there will be a problem) because everybody wants to learn.”

Responding to a question, Richard said: “I prefer it to be done on a consensus basis. It’s better.”

When pressed further, he added: “I throw in the idea, and then let them see what they think about it.”

At present, there are 2,000 practising lawyers in Sabah and Sarawak.

In his opening address earlier, Richard noted that some legal practitioners “never bother about the facts of the case” and could not answer questions posed by the judge in court.

He also observed that some of them preferred beating around the bush to presenting the killer points.

He even asserted that if a lawyer could not convince the judge in the first five minutes, the lawyer was on the verge of losing the case.

He added that it was equally pertinent for lawyers to submit the evidence to prove their case instead of jumbling information they gathered.

Richard also regretted that some junior lawyers lacked general knowledge as they had no idea about the existence of State Constitution, and could not distinguish between Act and Ordinance.

In recalling an incidence, he said: “There was once I asked a lawyer who the chief minister of Sabah was, the lawyer told me ‘some China man’.”

Given all that, he hoped the organisers would carry out similar seminars on a regular basis to enhance the standard of the legal practitioners in Sabah and Sarawak.