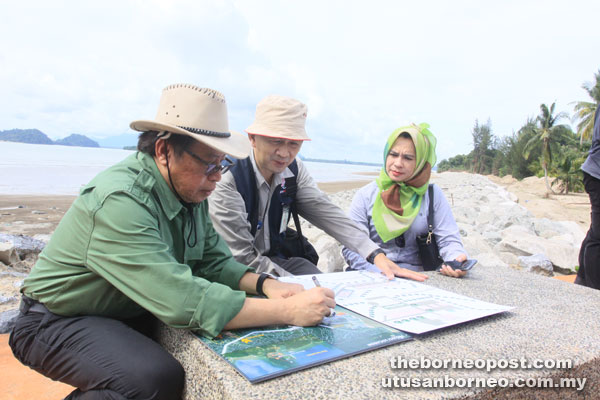 Abang Johari (left) explaining to Leh (centre) and Dayang Doriah the scale of the project being planned. 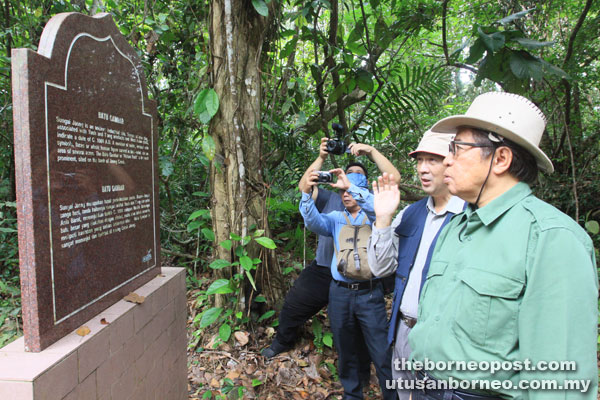 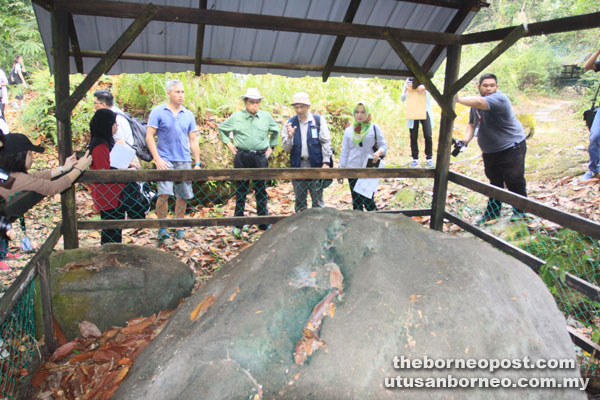 Abang Johari (centre) accompanied by Leh (second right) and Dayang Doriah (right) taking a look at the Batu Bergambar which has been fenced up.

KUCHING: From the myth of Princess Santubong to the Cursed Crocodile Stone and Batu Bergambar, Santubong will flourish into the most important archaeological site in this region in three years’ time, revealing the great cultural diversity of humanity in this part of the world.

With this vision in mind, Tourism, Arts and Heritage Ministry in collaboration with the Sarawak Museum Department has proposed creating an archaeological park along the Santubong Peninsula where five historical sites that provide an insight into its early history and what life was like in Santubong as far back as the 7th century are located.

Its minister Datuk Amar Abang Johari Tun Openg pointed out that many historical artefacts and sites in the Santubong Peninsula needed to be conserved and preserved.

“It will be an important attraction for tourists, historians and even archaeologists. This signifies Santubong as the international gateway to Borneo,” he told a press conference after visiting Batu Bergambar near Sungai Jaong and the Cursed Crocodile Stone (Batu Buaya) in Kampung Santubong here yesterday.

“These sites provide a glimpse into the early history of Hinduism, Buddhism, Santubong as trading port (between Borneo and China) and the  coming of Islam in this area,” he said.

The idea, Abang Johari elaborated, was to have an information centre where details of history can be displayed and to upgrade the site where the five historical stones are located.

“We want to improve the facilities in this area with friendly infrastructure which everyone can easily access,” he said.

“For instance, we will work with the Land and Survey Department to see how we are going to build the road from Jalan Sultan Tengah leading to the Batu Bergambar site, besides improving Sungai Jaong area so to create a link to the archaeological park,” he explained.

This archaeological park, he added, will also be connected to the proposed Wallace Discovery Centre near Santubong Point.

“We will rebuild the bungalow where Wallace did his research that had led to the creation of the Sarawak Law which talks about the origins of species after Darwin, and later coming up with the theory of evolution together with Darwin,” he said.

“I believe the evidence of the influence of culture and religions is very strong here as we are looking at a history of almost 1,500 years. As such, we hope this project can be completed entirely by 2019,” he elaborated.

Meanwhile, according to the Encyclopaedia of Iban Studies, the original inhabitants of Santubong were Ibans (Sea Dayak).

The name Santubong was believed derived from the word ‘Si-antu-ubong’ which means the spirit boat in the Iban language.

The name Santubong might also have been derived from ‘san choo bong’, meaning wild boar king or king of wild boar in the Hakka Chinese dialect.

Besides the famous local mythology that tells the tale of jealousy and rage between two sisters who were the princesses of Kayangan, other cultural artefacts found include the Batu Buaya, Batu Bergambar and Sultan Tengah Mausoleum, to name a few.