Thursday, January 21
You are at:Home»News»Sarawak»Christmas parade a show of religious, racial harmony 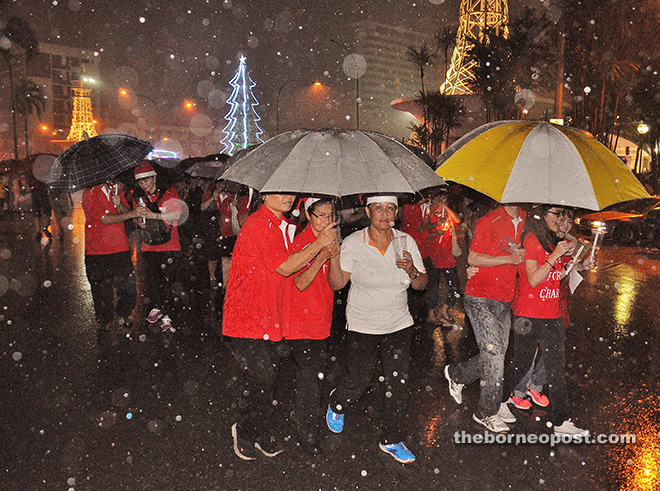 GLORY TO GOD: More than 10,000 people braved strong winds and downpour to take part in the annual Christmas parade in Sibu last night. It started to rain about 10 minutes after the start of the spectacle, which was hosted by St. John’s Church under Venerable Archdeacon Jamal Senada. — Photo by Othman Ishak.

SIBU: The spirit was high as more than 10,000 Christians from different denominations took to the streets here last night despite a downpour and strong wind to sing carols.

They all turned out for the annual Christmas parade, in which Christians under the Association of Churches in Sarawak (ACS) share joy and peace of the seasons in major towns in Sarawak.

The rain started 10 minutes after the parade started.

The parade, themed ‘Glory to God in the highest and peace on earth’, was hosted by St. John’s Church under Venerable Archdeacon Jamal Senada.

The parade was lighted by colourful floats decorated with Christmas lights while school bands from Sacred Heart, Catholic High School and Boys’ and Girls’ Brigade performed Christmas hymns and carols. Before the parade, the participants gathered at Sibu Town Square for songs, prayers and scripture readings before lighting of the Christmas candle by the participating church leaders.

Participants of the parade continue on, despite heavy rain. — Photo by Raymond Tan

Five lovely ‘angels’ with their cheerful warm smile next to a colourful float.

The young participants from RC St. Teresa Church and Sing Ang Tong Methodist Church who are in their wheelchair in their joyful mood as they pose in front of the giant size Christmas tree just before the event commences.

The sea of participants.