Sunday, November 27
You are at:Home»News»Sarawak»NCR forum fails to reach consensus 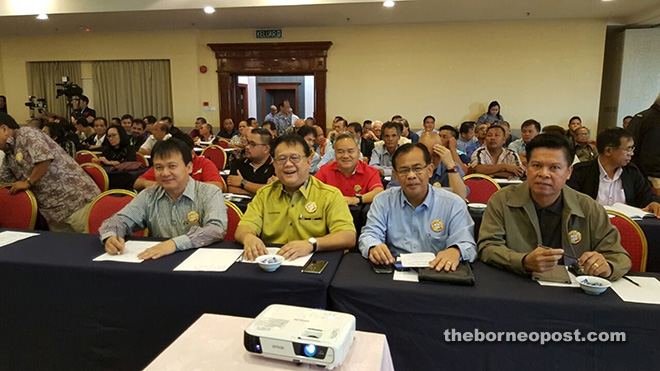 Nanta (second left) at the forum, flanked by Ali on his right and Jamit.

KUCHING: The forum on Native Customary Rights (NCR) land held at a hotel here yesterday has failed to reach any resolution following some disagreements among the participants – many of whom represent native community-based non-governmental organisations (NGOs).

Sarawak Dayak Iban Association (Sadia) president Sidi Munan was among those voicing opposition to the passing of a resolution at the session, stressing that the draft of the resolution should be provided to the association for a thorough study and passed back to the organising committee, the Dayak Intellectual Group, with their comments and recommendations.

In his response, forum organising chairman Dr Charlie Dudang assured all participants that a draft of the resolution would be finalised soon and passed to Chief Minister Datuk Patinggi Tan Sri Adenan Satem.

Deputy Rural and Regional Development Minister Datuk Alexander Nanta Linggi also believed that a resolution could not be reached as yet, adding that the forum yesterday was more on gaining feedback and ideas from participating NGOs.

“Today, I think it’s not to find a conclusion, but more of a brainstorming session to get feedback and ideas, as well as more views  that we’re not able to agree upon.

“To reach a resolution today would be a hasty decision – I would rather take the whole views together into an effective resolution; getting the legal people who are knowledgeable on the subject (NCR) to come together.

“The resolution needs to be fine-tuned so that whatever we ask from the government would be something that is meant for us; how we put (it) to the government must be in as such that the government could see that we’re not being over-emotional, but actually serious in claiming our rights. So to help ourselves, we must present the most effective (resolution) because at the end of the day, we want we want the ‘Pulau Galau’ (communal forest reserve) and ‘Pemakai Menoa’ (territorial domain) be recognised as NCR land,” he said.

Nanta, who is Kapit MP, believed that Adenan was a reasonable leader who had been ‘walking the talk’ since becoming chief minister.

On his part, Nanta said he was there (at the forum) as ‘a person, a Dayak and an Iban coming from a place with many ‘Pulau Galau’ and ‘Pemakai Menoa’ – he was truly reluctant to lose any of them.

“I grew up in the ‘ulu’ (remote area) and I think I understand enough about the status of ‘Pulau Galau’ and ‘Pemakai Menoa’ to be included under NCR land,” he said, adding that it was indeed the rights passed down to them from their forefathers hundreds of years ago.

Nanta was also confident that being a fair leader, Adenan would understand that the forum yesterday was not an illegal gathering, but a platform for the participants to converge on so that whatever being put forward to the government would be reasonable.

“I am putting my belief in him (Adenan) as he is a reasonable person and a leader for all – if we need to negotiate, we’ll negotiate,” he pointed out.

The forum was attended by about 300 people, comprising those from the Iban, Bidayuh and Orang Ulu communities – among them were Krian assemblyman Ali Biju and Bukit Goram assemblyman Jefferson Jamit Unyat.