Monday, March 1
You are at:Home»News»Sarawak»Brooke Gallery sheds light on watershed of White Rajahs 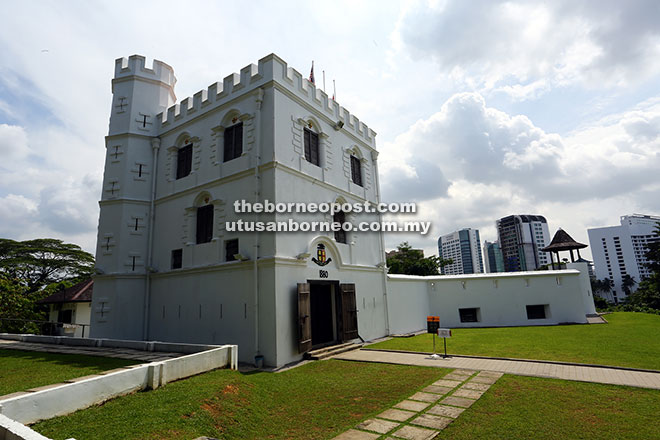 A view of Fort Margherita where the Brooke Gallery is housed. —Photos by Muhammad Rais Sanusi

KUCHING: To inspire the future, one needs to explore the past; and an exploration of Sarawak’s history is now made possible at the Brooke Gallery.

What comes to your mind when you think of Sarawak’s history? “The White Rajahs,” one may point out.

However, not all Sarawakians are knowledgeable enough to tell the story of one of the most remarkable kingdoms in the state’s history — the White Rajahs.

Seventy-five artefacts and 175 images are presently exhibited at the gallery at Fort Margherita in Petra Jaya here.

The gallery, which was founded in conjunction with the 175th anniversary of the state, takes visitors on a thematic journey that enables them to understand why Sarawak’s history under the White Rajahs’ ruling ranks as one of the most exceptional in all of Southeast Asia.

This permanent exhibition focuses on the people, places and events that had shaped Sarawak.

The gallery takes visitors on a journey from how the first White Rajah James Brooke intervened in the rebellion in September 1841, to when the White Rajahs’ rule was shattered by the Japanese invasion in 1941 and ended in July 1946 with Sarawak’s annexation as a British Crown Colony.

Met at the gallery yesterday, Jason said the Brooke Gallery is not just about the Brooke family but the history of Sarawak and what took place during the period from when his adventurous ancestor James sailed all the way from the United Kingdom to Borneo, to Anthony Brooke advising the British government on the constitutional matters leading up to the formation of Malaysia in 1963.

He said he was a little overwhelmed by the response  received so far.

Since opening, the gallery has registered more than 10,000 visitors from 51 countries including the United Kingdom, the United States, Australia, France, the Netherlands, Indonesia, Italy, Japan, Singapore, New Zealand, China, Taiwan, Slovakia and Finland.

According to Jason, 90 per cent of the visitors so far are locals.

“This is something that the local people support. The local community sponsored the CCTVs and other facilities.”

The gallery is not equipped with air-conditioners, he said, “but it is quite comfortable because we’ve got thick walls.”

Upon entering the gallery’s welcome area, visitors will make their way to the first of nine themed displays, ‘The Allure of Borneo’, where they will learn about explorers and traders who were attracted to Borneo’s shores over the centuries leading up to James’ arrival in 1839.

As they explore further, they will go up another floor through the fort’s original spiral staircase.

Jason said James sailed with some 20 friends of his in the ‘pleasure cruiser’ or ‘expedition vessel’ to explore the exotic land of Borneo way back in the 1800s.

The second themed display, ‘Raiders and Rebellion’, is where visitors will learn about Brunei’s interest in Sarawak, James’ timely intervention and how he came to be Rajah of Sarawak.

This theme, Jason said, features one of Sarawak’s most senior Malay chiefs Datu Patinggi Ali, who surrendered in 1840 so that James would become Rajah of a Sarawak that was independent of Brunei.

On the same floor, images on Sulu pirates and headhunters are also displayed.

It was in 1841 that Sarawak was created and the Sarawak flag was hoisted for the first time in 1848.

The Sarawak flag, introduced by Rajah James, was modelled on the Brooke family coat of arms. In 1870, the second Rajah Charles Brooke altered the colours to reflect the cloths in which gifts were presented to him by the three main communities: Dayak (black), Chinese (red) and Malay (yellow).

Jason said the ‘Sword of State’ was the original fighting sword of Rajah James. The sword sits on a yellow cushion that represents the Malay royalty.

‘Building Sarawak’ introduces visitors to the second Rajah Charles who lived and ruled in the state for over 60 years.

“Rajah Charles adopted the Sarawak culture. He did not feel like he was an Englishman. He dressed as an Iban sometimes and he lived among the Ibans for some years and became sympathetic to the local culture,” said Jason.

Rajah Charles was described as upright, aloof and serious. His only care was Sarawak, an almost ruthless devotion that sometimes distanced him from friends, family and society in England but endeared him to the people for whom he laboured.

During the 60 years of Rajah Charles’ rule, Sarawak saw the construction of unique civic architecture and infrastructure including the Court House, the first railway and the Council Negri, which is Malaysia’s oldest legislative council.

Upon ascending another spiral staircase, visitors will be enlightened by another themed display called ‘Life in Brooke Sarawak’. People will learn about what life was like under Brooke rule for the richly varied inhabitants of Sarawak.

The Regatta dates back to 1872 during Rajah James era. This century-old community event marks how people of Sarawak learned to live in peace and harmony rather than challenge each other in violence.

During that time, the native people were increasingly drawn into a market-based economy in which pepper and rubber cultivation proved more lucrative than the traditional collection of jungle produce. It was also when Sarawak’s economic activities and businesses started booming.

Speaking about Rajah Charles’ wife Ranee Margaret, Jason said she married Rajah Charles when she was only 19.

“She came here (Sarawak) as a 19-year-old girl. She dressed as a Malay; she spoke and understood the Malay language which was quite taboo in those days.”

The next theme is ‘A History of Sarawak Under its Two White Rajahs’ which provides a window into the lives of the Brooke rulers and their families.

Visitors will also learn about the nine Cardinal Principles of the Rule of the English Rajah, enacted by the Rajah of Sarawak on Sept 24, 1941.

Illustrating Sarawak’s international status under White Rajah rule, the theme ‘Sarawak on the World Stage’ will help people understand the unique relationship between Sarawak and Great Britain as well as the challenges of maintaining the partnership in a changing world.

In 1941, Japanese forces invaded Sarawak and its peaceful existence was dramatically shattered.

In the same theme, visitors will explore the Japanese Occupation period, the Provisional Government in Exile through which the Rajah Muda, Anthony Brooke is introduced to the story, as well as the recent history on the liberation by Allied Forces in 1945.

Between 1942 and 1945, Japanese-issued currency was used in Sarawak. This currency was referred to as ‘duit pisang’ (banana money), and declared worthless by the Australian military authorities after liberation.

The theme ‘Rebirth of Sarawak’ depicts the end of White Rajah rule when Sarawak became a British Crown Colony.

After the war, Rajah Muda Anthony along with local community leaders challenged the loss of Sarawak’s independence. Their unsuccessful attempts helped to cement a sense of Sarawakian identity, paving the way for Sarawak’s role in the formation of Malaysia in 1963.

Prior to the formation of Malaysia, the Anti-Cession Movement was championed by Ranee Muda Kathleen, Anthony’s wife. Visitors get to learn the Ranee Muda’s epic tour of Sarawak in 1947/48.

Before visitors make their way up to the roof terrace to take in the view of Kuching City, they will come to a corner showing bronze works depicting major ethnic communities known under the Brooke rule: Dayak, Kayan, Malay and Chinese.

In more tangible form, Jason said the Brooke legacy can be seen at the Astana here, the Old Court House, the Sarawak Museum, Fort Margherita and others.

In intangible form, he said the communities of Sarawak, irrespective of faith, belief and background, had come together as Sarawakians.

“Visiting the gallery should be exciting as it is accessible and digestible given the models, statues and badges (on display). Hopefully people will come, not just once, so that they can learn something new every time they visit.

“It is absolutely a privilege for me to be a part of this project. Everybody has something they can contribute,” added Jason.

Meanwhile, gallery manager Liza Sideni disclosed that among the special guests who visited the gallery were Deputy Chief of Mission of the US Embassy in Kuala Lumpur Edgard Kagan and German Ambassador to Malaysia Holger Michael.

She said the gallery also welcomed wedding photo shoots which would be charged a minimal fee ranging from RM50 to RM100, depending on the hour.

Liza said schools are most welcomed to conduct field trips at the gallery.

Run on a non-profit basis, the gallery is open from Monday to Friday between 9am and 4.45pm. It is open on Saturday, Sunday and public holidays from 10am to 4pm.

Jason gestures while speaking about the background of the ‘Sword of State’.

Taking in the view of Fort Margherita and Kuching city in the background from the roof terrace.

Bronze depictions of major ethnic communities known under the Brooke rule: (from left to right) Dayak, Kayan, Malay and Chinese.

Background on the Brooke Dynasty.

Jason poses next to the original spiral staircase.

Foreign visitors seen inside the gallery.

Previous Article‘Price’ to pay for lost passport, as ministry mulls action
Next Article Ops aimed at homeless in Limbang to be launched soon — Fatimah