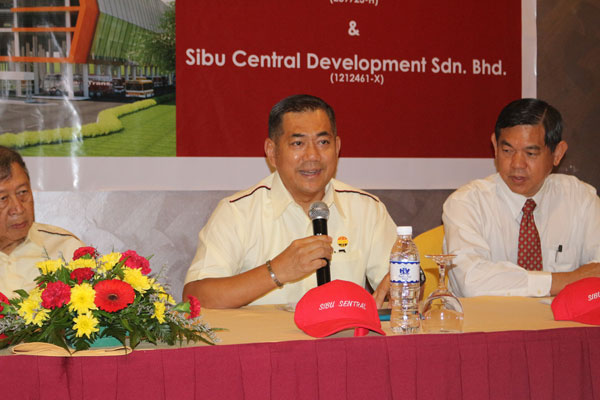 Ghazali (middle) is seen at a press conference for the Sibu Sentral yesterday.

The bus terminal aims to function as a regional transportation hub that can accommodate high passenger traffic volumes and 1700 car parks to ensure no issue of parking.

Commuters alighting at this new bus terminal will find integrated facilities such as shopping centres, food courts, recreation facilities, hotels and apartments present to meet their every need.

Ghazali Ismail, general manager of Permodalan Assar commented: “One of the most important things that is often overlooked in bus terminals is the bus passenger traffic flow.

“Often times, this is completely taken for granted, and in our view we should instead take advantage of the flows of the passenger traffic and aim to build more than just a bus terminal in Sibu.”

Current plans for Sibu Sentral include multiple components namely commercial outlets, residential apartments, offices, entertainment facilities, and other facilities including a hotel, police station and Surau; making the bus terminal a convenient one stop shop for both bus passengers and local Sibuians alike.

Ghazali explained the purpose of including such components is to attempt to create a new experience as most bus terminals are very much independent from the rest of other facilities.

“Sibu Sentral aims to not only cater for Sibu folks but also people from Kapit, Dalata, Sarikei, Miri, Bintulu, and even Indonesia and Brunei,” he added.

“The commercial facilities, hotels and apartments are provided for to cater towards all passenger’s needs.”

He supported his view by drawing parallels to international airports such as the Kuala Lumpur International Airport 2 (klia2) which in recent times has seen a shift towards the inclusion of shopping and entertainment facilities to accommodate and capitalise on passenger traffic.

“What we want to do now is to create a one stop integrated facility whereby it may serve the needs of end users.

“Alongside this idea is to reduce traffic congestion coming into town. Take Kuching Sentral for example. We can see that majority of express bus services use the terminal as its anchor terminal.

“As they do not go anywhere else, traffic is more streamlined and less congested,” Ghazali shared.

He continued on to highlight that this idea of integrating so many facilities alongside a bus terminal is not a novel idea as Kuching Sentral was developed with the same concept in mind and is already an established success with a very high passenger traffic flow.

The project is estimated to have a total gross development value (GDV) of RM300 million and is expected to proceed to physical development next year once its building plans are finalised and approved.

Funding for the project will once again follow suit with Kuching Sentral and be completely privately driven.

“Although we are a state owned company, I think there is sufficient local commercial viability present for the project to support itself as enterprises that have a common objective would want to and be able to complement and benefit from each other upon completion of the project.”