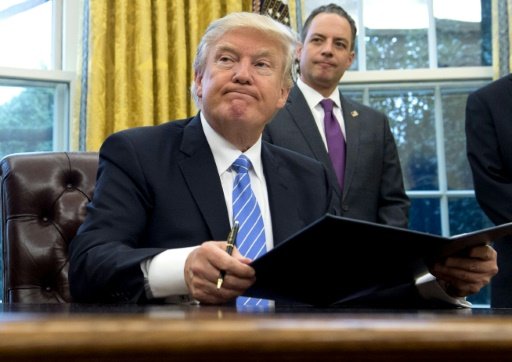 PARIS: US President Donald Trump’s decision to abandon the Trans-Pacific Partnership has left the ambitious trade agreement in limbo and focused attention on the world’s other trade frameworks. Here is an overview.

Founded in 1995 and based on the General Agreement on Tariffs and Trade (GATT) going back to 1947, the WTO is a global framework for the liberalisation of trade. Its 164 member states are committed to furthering free trade, especially by lowering tariffs and non-tariff barriers and by harmonizing trade rules. However, successive rounds of WTO trade talks since 2001 have stalled. This has prompted individual member states to seek accords with their main, often regional, trading partners instead. There are 271 trade agreements in force in the world today, according to Sebastien Jean, director of the French research body Cepii. They range from bilateral deals to regional or inter-regional accords. Trade flows covered by such deals made up 37 percent of world trade in 2013.

Countries create free-trade areas by eliminating most tariffs between them while keeping control over their own trade policies towards third countries. Important ones are:

NAFTA. The North American Free Trade Agreement grouping the US, Canada and Mexico went into force in 1994 and is the world’s biggest free-trade area. Trump, blaming the accord for the outsourcing of American jobs to Mexico, wants it renegotiated.

Customs unions take their level of cooperation a step beyond free-trade areas by pursuing a joint trade policy towards the outside world, including identical tariffs for third countries.

EU. The European Union is the world’s biggest customs union. It is made up of 28 members on behalf of whom it has signed trade deals with outside countries, including Turkey, northern African states and South Korea. British voters last June decided to leave the EU. Many experts say this implies an exit from the EU customs union, although there still is debate about this.

MERCOSUR. The Southern Common Market, created in 1995, has as full members Argentina, Brazil, Paraguay, Uruguay and Venezuela whose membership was however suspended in December 2016. Other South American countries have association agreements with MERCOSUR. The sub-regional bloc’s free trade policy excludes certain sensitive sectors, including the automobile industry.

TPP. The Trans-Pacific Partnership was agreed in 2015 after years of talks between 12 countries on or near the Pacific rim. They are the US, Australia, Brunei, Canada, Chile, Japan, Malaysia, Mexico, New Zealand, Peru, Singapore and Vietnam. It has not gone into force and the US has now withdrawn from the group, casting deep doubt on its future.

CETA. The Comprehensive Economic and Trade Agreement between Canada and the EU was signed in October 2016. On Tuesday, members of the European Parliament’s powerful trade committee voted in favour the agreement, clearing a major hurdle for the contested deal. A showdown vote by the Parliament’s full session is scheduled for February 15.

TTIP. The future of the Transatlantic Trade and Investment Partnership between the EU and the US is in serious doubt. Negotiations for the ambitious trade deal started in 2013, but it has run into opposition from some European countries where voters are increasingly sceptical towards globalisation.

RCEP. The Regional Comprehensive Economic Partnership is a planned free-trade deal between ASEAN members and their regional trade partners China, Japan, Australia, India, South Korea and New Zealand. Expectations of the TPP’s demise are likely to give this China-sponsored initiative fresh impetus.