Monday, November 28
You are at:Home»News»Nation»Eight teen cyclists killed, mowed down by car 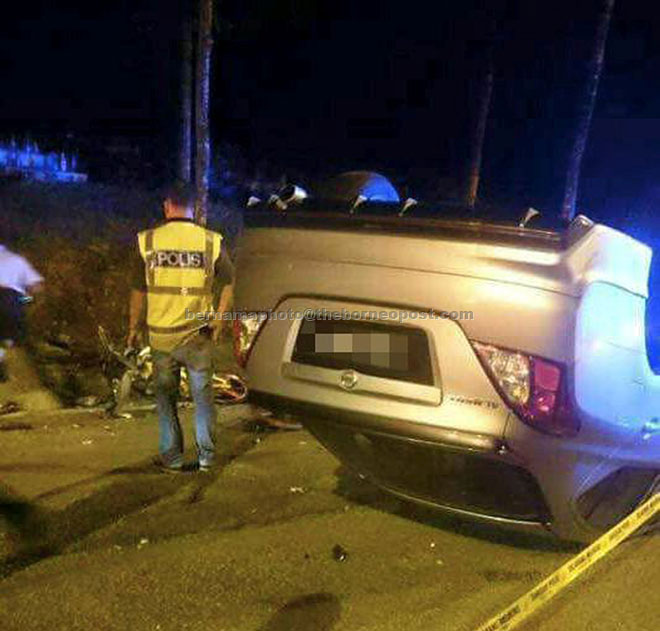 A police personnel at the accident scene. — Bernama photo

JOHOR BAHRU: Eight male teenagers on bicycles were killed after they were mowed down by a car in Jalan Lingkaran Dalam, besides the Mahmoodiah cemetery, near here, early yesterday morning.

“The injured are being treated at the Sultanah Aminah Hospital,” he told reporters at the hospital mortuary here yesterday.

He said a group of 20 to 30 teenagers, aged 13 to 17 years, on bicycles were believed to have obstructed Jalan Lingkaran Dalam and other nearby roads before before being mowed down by the car.

“A 22-year-old woman driving a car from Taman Pelangi ploughed into a group of the youths when she was believed to have failed to brake in time,” said Sulaiman.

“The driver also sustained minor injuries and sent to the hospital as she was traumatised,” said Sulaiman.

He said the woman was currently detained to help in investigation.

He said, of the 16 victims, six were still schooling.

Sulaiman said preliminary investigation found the woman was not drunk and was not speeding during the incident.

Sulaiman said police found the bicycles used by all the victims had been modified and were not following the permitted specifications.

“The offence is under Part Three of the Highway Code whereby a cyclist must abide by the method in paragraph five until Article 68 and summonses could be imposed under the Malaysia Highway Authority 165/69 for modifying a bicycle.

“Action too can be imposed on the guardian who is negligent under Section 33 of the Child Act 2001 for not supervising their children,” he said.

As such, he reminded parents to always monitor the activities and movements of their children.

Throughout last year, he said 28 modified bicycles had been seized during 28 operations.

Previous ArticleWe do things according to our law, says Dr Subra
Next Article Come to Tangga Art fair, it ends today