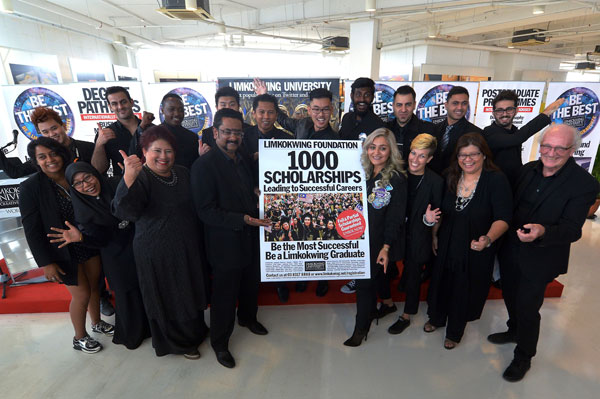 Fajura (front row, third left) and Limkokwing University special assistant to the president Dr Mahaaganapathy (front row, fourth left) with the lecturers and ex-students who received their scholarships at a press conference in Cyberjaya. — Bernama photo

Its vice-president of corporate relations, Datuk Fajura Juffa Mohd Mustafa Kamal said seven types of scholarships would be provided to eligible applicants, especially from the Bottom 40 per cent group.

“Some students think those who score academically usually have opportunities to obtain scholarships. So in Limkokwing University, we want every student who did not get straight 8As and those who lack funds, to study with us and excel in their life,” she said at a press conference to announce the scholarships,  here, yesterday.

Fajura Juffa said the scholarships could be applied for throughout the year beginning yesterday, with the university having four intakes — in February, April, July and September.

As of yesterday, the creative university has received 16 applications under the Cyberview Scholarships and for the rest, only 15 have applied and is expected to gain more popularity after this.

To a question, Fajura Juffa said a scholarship would be suspended for that particular semester if the student had failed a subject but would be reinstated  following the student’s academic performance report.

On another development, she said the Limkokwing University campus in Melaka would be a full-fledged university in June or July, offering Tourism Management courses.

Meanwhile, Limkokwing Academy Kelantan was still planning to enhance and offer more courses under the Human Resource Ministry, she said, without elaborating. — Bernama