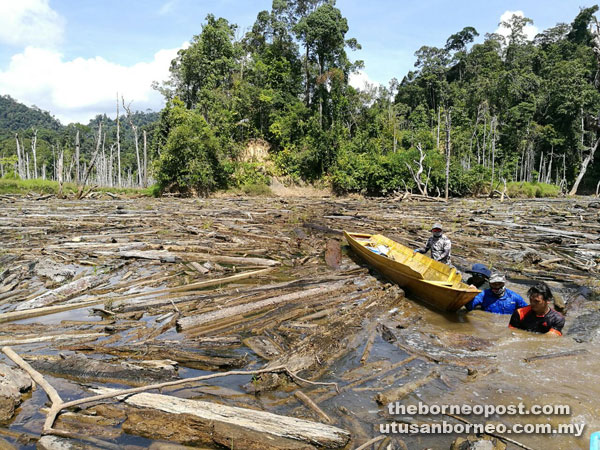 A picture taken on Jan 13 of a log jam at Sungai Paran, a tributary of Balui River where communication is almost impossible. — Photo by Chimon Upon

KUCHING: Sarawak Hidro Sdn Bhd (SHSB) and Sarawak Energy Berhad (SEB) should foot the bills to clean up the 30km-stretch of log jam in the upper reaches of Balui River.

Belaga assemblyman Liwan Lagang believed that the two companies, having tapped revenue from the river (and Bakun Dam) should be the ones paying to remove the debris.

Liwan, who has just gone to the ground to check on the log jam, said the debris had been affecting the livelihood of the people of Long Jawie and Long Busang, and that the log jam had to be cleaned up fast.

“Who is responsible? Theoretically, it’s either Natural Resources and Environment Board (NREB) or Sarawak Rivers Board (SRB) should be responsible.

“However, they cannot do it because they don’t have the resources. It would take millions of ringgit to try to remove the floating debris of over 30km long on the  river surface,” Liwan said when contacted yesterday.

He said something had to be done to remove the floating debris for the safety of all river users as well as for the protection of the river.

“If no action is taken to remove the floating debris, it would take 20 years for the wooden debris to rot and finally dissolve in the river water.

“It is true that either the state or the federal government should come up with the funding to remove the debris. However, I think at the end of the day, it should be SHSB and SEB who should pay for the cleaning of the river debris,” said Liwan, who is also Assistant Minister for River Transport.

“The cleaning work should be done properly for the sake of the people who have given up so much to allow the dam to be built and the river to be tapped.”

“Our people (those affected by the building of Bakun Dam) have made so much sacrifices – we agreed to give up our ancestral land and cultures and all that we had and to be uprooted completely and be relocated to give way for SHSB and SEB to make money.

“Sarawak Hidro and SEB have been taking things for granted. As we have sacrificed all that we have, it is now their turn to do something for us. They should pay to clean up the river to give us back our river,” said Liwan, who is one of those affected by the Bakun Dam.

Masing added that not only Balui River was facing the problem of floating debris, Batang Ai also had the same problem.

He said the debris in Balui River had to be dealt with and suggested using tug boats to clear the river so that the local community could continue to use it to look for food and for transportation.

“After cutting through, put a net to keep the debris in place. After a few years, the debris will disappear,” Masing, who is also Minister of Infrastructure Development and Transportation, said.