Friday, September 30
You are at:Home»News»Sarawak»CM: Kuching – Serian LRT under study 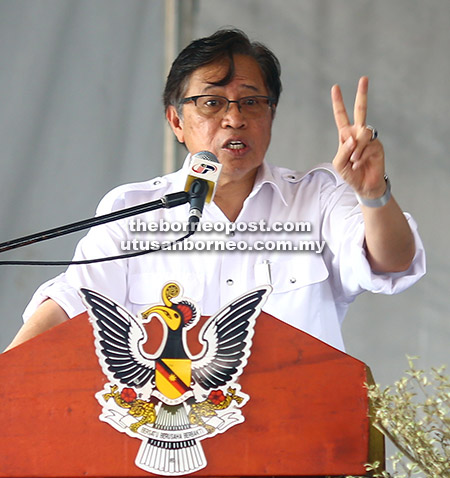 Abang Johari gestures the number 2, to inform that he had only been the Chief Minister for two months, but pledging to continue the people-centric policies of his predecessor, the late Datuk Patinggi Tan Sri Adenan Satem. — Photo by Muhd Rais Sanusi

KUCHING: A Light Rail Transit (LRT) system connecting Kuching, Samarahan and Serian Divisions is not a far-fetched idea after all.

Chief Minister Datuk Amar Abang Johari Tun Openg said yesterday the LRT system is being studied for inclusion in the public transport plan now being drafted by the state government to solve traffic congestion in these three divisions.

On how soon the plan will come into reality, Abang Johari who is also Finance Minister and Resource Planning and Environment Minister, said this will depend on the new financing model which he will announce next month.

“I will announce the new financing model next month, and we see how it goes (from there). I have my way, we (the government) have to be creative. I cannot rely on federal (funds) for this one, because if we wait but it (the fund) does not come, then it gets halted.

He said the proposed LRT system will provide easy access for locals and tourists to destinations within the three divisions especially places of interests within the southern tourism corridor which stretches to Tanjong Datu.

Abang Johari, who also holds the portfolio as Minister of Housing and Urbanisation and Minister of Tourism, Arts and Culture, envisioned the LRT system to utilise the latest in information technology (IT), where users can use their gadgets to plan their movement.

Having said that, he asked for patience in making this plan a reality, and leave it to the qualified persons including Ministry of Housing and Urbanisation and Ministry’s permanent secretary Datu Sudarsono Osman to do the proper study first.

“Datu Sudarsono has the experience, he will plan it. This one is a continuous programme. I don’t know how long I will be the Chief Minister. Whoever becomes the CM after me, he will continue (this initiative).

“As the Chief Minister, you must have long term policies for the benefit of the people,” he said.

He also mentioned that he has instructed Sudarsono and the permanent secretary of Ministry of Resource Planning and Environment (Dr Wan Liz Osman Wan Omar) to work together in planning the public transport system.

He pointed out that if the matter is not resolved, it will turn into an issue against the government since development of new townships and housing areas have led to increase in traffic volume and this leads to road congestion.

“We have to find a solution. This will involve substantial amount of money. Therefore, we need to do early planning.

“A car journey should take 30 minutes to reach the Kuching city centre from Samarahan. Public transport must be efficient. Although we have the Rapid stage bus coming, but we must have other alternatives.

“Of course, some people say this is hard to achieve because our population is only over one million people. But over time, the population will be more,” he said.

Earlier in his speech, Abang Johari mentioned that LRT which is a much more efficient public transport syatem could be the way forward for Sarawak.

“Nevermind that people may say this idea is ‘jauh pawe’ (far-fetched). But if we can do it, then why not? If this can benefit our people, why not do it,” he said.